Formula One world champion Sebastian Vettel extended his contract with Red Bull until the end of the 2014 season on Monday. 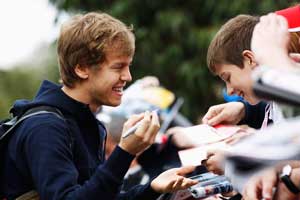 Formula One world champion Sebastian Vettel extended his contract with Red Bull until the end of the 2014 season on Monday.

The deal for the sport's youngest ever champion should end speculation that he could defect to Ferrari.

The 23-year-old German finished ahead of Ferrari driver Fernando Alonso and Red Bull teammate Mark Webber in the 2010 championship.

Vettel, who became the youngest driver to win a F1 race at 21, also helped his team win the constructors' championship.

The new season begins with the Australian Grand Prix in Melbourne on March 27.

Comments
Topics mentioned in this article
Formula 1 Red Bull Mark Webber Sebastian Vettel
Get the latest updates on ICC T20 Worldcup 2022 and CWG 2022 check out the Schedule, Live Score and Medals Tally. Like us on Facebook or follow us on Twitter for more sports updates. You can also download the NDTV Cricket app for Android or iOS.