Formula One boss Bernie Ecclestone hopes the Bahrain Grand Prix will be staged during the championship's summer break after being called off due to unrest on the island. 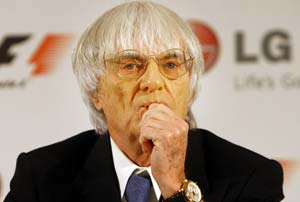 Formula One boss Bernie Ecclestone hopes the Bahrain Grand Prix will be staged during the championship's summer break after being called off due to unrest on the island.

Maintaining that "we need a race in Bahrain," Ecclestone believes the original season-opener can go ahead in August despite the country's intense summer heat.

"If the crown prince is of the opinion that his country is able to host a race we will return to Bahrain," Ecclestone said on the official F1 website on Tuesday. "I think the teams are sensible enough even to race in Bahrain in the summer break, and despite high temperatures, because this is the way we can support the country."

A new date could be decided by the World Motor Sport Council next Tuesday ahead of the new season opener in Melbourne on March 27.

"The FIA has to change the calendar and Bahrain has to apply for a new slot," Ecclestone said. "I have already spoken with FIA President Jean Todt about the possibility of finding a new date and we both agreed that a decision has to be made before the season starts."

Comments
Topics mentioned in this article
Formula 1 Michael Schumacher Brawn Honda Giancarlo Fisichella Lewis Hamilton Sepang McLaren Bernie Ecclestone
Get the latest updates on ICC T20 Worldcup 2022 and CWG 2022 check out the Schedule, Live Score and Medals Tally. Like us on Facebook or follow us on Twitter for more sports updates. You can also download the NDTV Cricket app for Android or iOS.