Formula One boss Bernie Ecclestone says creating artificial rain during races could liven up the championship. 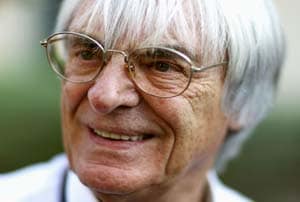 Formula One boss Bernie Ecclestone says creating artificial rain during races could liven up the championship.

Complaining that overtaking is difficult in dry conditions, Ecclestone says the "most exciting races (are) in the wet so let's think of making rain."

On F1's official website, Ecclestone added: "Why not let it 'rain' in the middle of a race? For 20 minutes or the last 10 laps? Maybe with a two-minute warning ahead of it."

Ecclestone says "suspense would be guaranteed and it would be the same for all."

In the interview Ecclestone also predicted women could be running the sport in five years, claiming that "they don't get trapped so easily in their own ego. Women don't have to play golf to make deals."

Comments
Topics mentioned in this article
Formula 1 Bernie Ecclestone Michael Schumacher Brawn Honda Giancarlo Fisichella Lewis Hamilton Sepang McLaren
Get the latest updates on ICC T20 Worldcup 2022 and CWG 2022 check out the Schedule, Live Score and Medals Tally. Like us on Facebook or follow us on Twitter for more sports updates. You can also download the NDTV Cricket app for Android or iOS.