The Red Bull driver says sparks during the Indian Grand Prix showed that every racer is vulnerable despite his position. 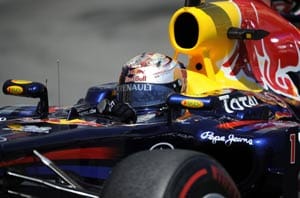 Speaking ahead of this weekend's Abu Dhabi Grand Prix, the 25-year-old German said he and the Red Bull team could easily suffer setbacks to upset their current domination.

He said: "If you just look back, India was a great race for us but a couple of laps from the end we had some sparks."

"Obviously it was not a problem, but it doesn't take much imagination (to see that it could have been)."

"If something like this comes up, it shows you how vulnerable you are, no matter what position you are in. It doesn't take much and you might end the race not scoring the points that you were hoping for and then the whole picture looks different again with the points system we've had since 2010.

"In 2010, in particular, various people got written off and then written back in depending on recent results. That's something we shouldn't forget."

Vettel also does not believe Red Bull has proved to be the fastest car despite his string of wins.

"I think in the second stint on hard tyres (in India), McLaren and Ferrari were arguably a little bit quicker than us. But then I could benefit from the gap I had after the first stint.

"I think Jenson (Button) put the fastest lap in at the end of the race in India, 1.5sec quicker than he did before. I don't know what he was doing before that, but it shows they were quite quick."

The German put his dominant pace three weeks ago in Japan down to being particularly in tune with Red Bull's set-up that weekend.

"In Japan," he said, "I was really happy with the car and the balance in the race was just fantastic. That's what then allows you to put a really strong lap in."

Red Bull could secure the constructors' championship in Abu Dhabi this weekend - something Vettel said he was unaware of until informed by Australian team-mate Mark Webber.

"We were on the same plane and Mark said it would be quite bad for the constructors' if this plane went down..." Vettel joked.

"Obviously it would be very special for us to win the championship here, but in order to do so we have to have a strong weekend and score more points than the others."