Ferrari team principal Mattia Binotto had told a British newspaper that if next year's cap was lowered the team would "look at other further options". 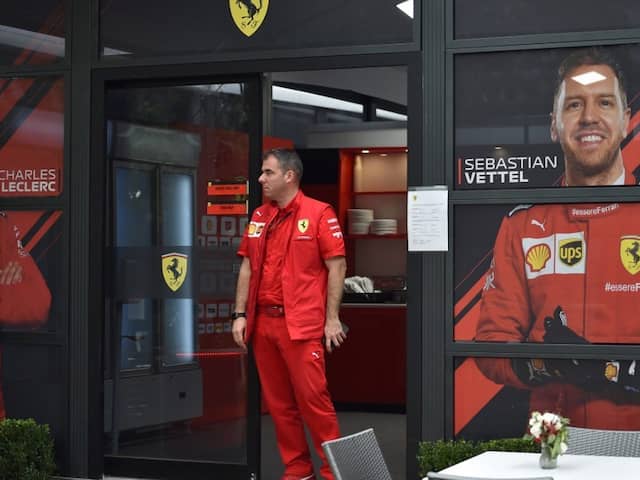 Ferrari was unhappy last year with the decision to introduce a budget cap of $175 million per team.© AFP

Ferrari back-tracked on Thursday after team principal Mattia Binotto seemed to warn the team might quit Formula One if a planned spending cap was lowered further because of the coronavirus crisis. Binotto told a British newspaper that if next year's cap was lowered the team would "look at other further options" but the team explained in a statement that he meant they would need additional outlets to express their "racing DNA", without saying whether those might compete with Formula One.

Ferrari was unhappy last year with the decision to introduce a budget cap of $175 million (161 million euros) per team from next season.

With the first nine races of this season already cancelled or postponed, the sport held a meeting last week to discuss reducing next year's cap to $145 million and $130 million the season after, but could not reach an agreement.

Sources suggested that Ferrari and another big-spending team, Red Bull, opposed the changes.

In an interview with a British newspaper published late on Wednesday, Binotto appeared to suggest the team, which has an annual budget of more than $400 million might leave Formula One.

"The $145m level is already a new and demanding request compared to what was set out last June," he told the Guardian. "If it was to get even lower, we would not want to be put in a position of having to look at other further options for deploying our racing DNA."

On Thursday, Ferrari issued a statement to "clarify" what Binotto had said.

"He never mentioned about Scuderia Ferrari quitting F1, on the contrary, he said that we would not want to be put in a position of having to look at further options, besides continuing racing in F1, for deploying our racing DNA," it said.

Binotto had argued that it as unfair to impose a flat cap.

"In F1, we have all sorts of teams with different characteristics,"  he said. "They operate in different countries, under different legislation and with their own ways of working."

"We are well aware that F1 and indeed the whole world right now is going through a particularly difficult time because of the COVID-19 pandemic," he added. "However, this is not the time to react in a hurry."

Many of the teams at the back of the grid spend around $150 million and are struggling to survive.

In recent weeks, one of the poorer teams, McLaren, has led calls for a cap of $100 million.

Its principal, Zak Brown, said Formula One was in a "very fragile state" and added "I could see four teams disappearing if this isn't handled the right way."

On the other side, Christian Horner of Red Bull has argued against dropping the cap below $145 million.

"F1 has to be the pinnacle of motorsport in terms of technology and performance," Horner said. "It must be attractive for the car manufacturers and the sponsors who want to be linked to this most prestigious category. If we restrict costs excessively then we run the risk of reducing the level considerably, bringing it ever closer to the lower formulae."

Sebastian Vettel Charles Leclerc Formula 1
Get the latest Cricket news, check out the India cricket schedule, Cricket live score . Like us on Facebook or follow us on Twitter for more sports updates. You can also download the NDTV Cricket app for Android or iOS.