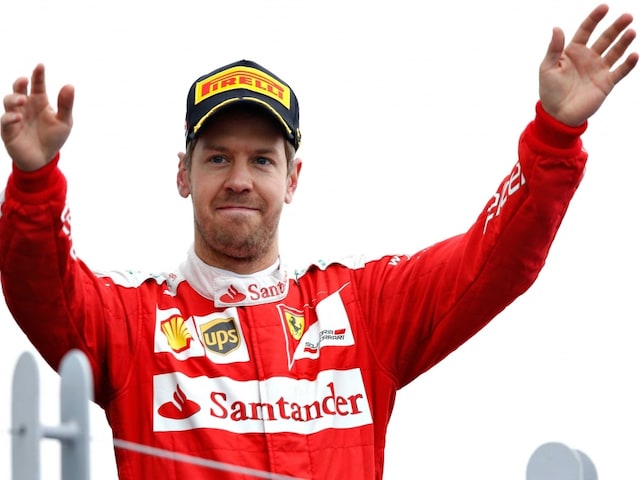 Sebastian Vettel saved a couple of seagulls as he finished in second position during the Canadian Grand Prix.© AFP

Sebastian Vettel offered one of Formula One's more exotic excuses on Sunday by saying he had lost time in the Canadian Grand Prix by saving two seagulls from being flattened by his Ferrari.

"I think it was a couple that wanted to commit suicide," the German said with a smile after finishing second to Mercedes' world champion Lewis Hamilton at a chilly Circuit Gilles Villeneuve.

"They were at the apex of turn one. Lewis obviously didn't care so he made up quite a bit of time, about half a second, but I didn't do that couple that favour to say goodbye for good," the four times Formula One world champion told reporters.

"By the time Lewis came around, they just flew off. Wasn't fair. I brake for animals, Lewis doesn't ..."

The German, who had led the race until his first pitstop, continued the theme afterwards with some relish -- hijacking Hamilton's interview with Britain's Sky Sports television for some more good-natured banter about birds.

"I feel that you're using the seagulls. I feel that they were innocent," said an amused Hamilton. "I saw you lock up and then the seagulls did move."

Getting more into the spirit, he added: "Hey man, it was planned. You know I'm good with animals, right? Like Doctor Dolittle, I told them to be there and they were there."

Vettel insisted he had a case, even if he then undermined it by stating: "I'm a racing driver, so I have to find some sort of excuse for why the hell you beat me today.

"I went into turn one and I saw this stupid couple of seagulls standing there, all relaxed," continued the German. "My car's red. It's easy to see, it doesn't blend in like yours.

"That's what really annoyed me. There's a red car coming and they stayed there."

The last word went to Hamilton, who celebrated the 45th win of his career and fifth in Canada.

"I think I might have to buy you a couple of seagulls," he said. "I think you need a couple."

Comments
Topics mentioned in this article
Ferrari Sebastian Vettel Lewis Hamilton Canadian Grand Prix Montreal Formula 1
Get the latest updates on IPL 2020, check out the IPL Schedule for 2020 and Indian Premier League (IPL) Cricket live score . Like us on Facebook or follow us on Twitter for more sports updates. You can also download the NDTV Cricket app for Android or iOS.