Lewis Hamilton topped the Friday practice session in Montreal but Ferrari and Red Bull maintained the pressure ahead of the Canadian Grand Prix. 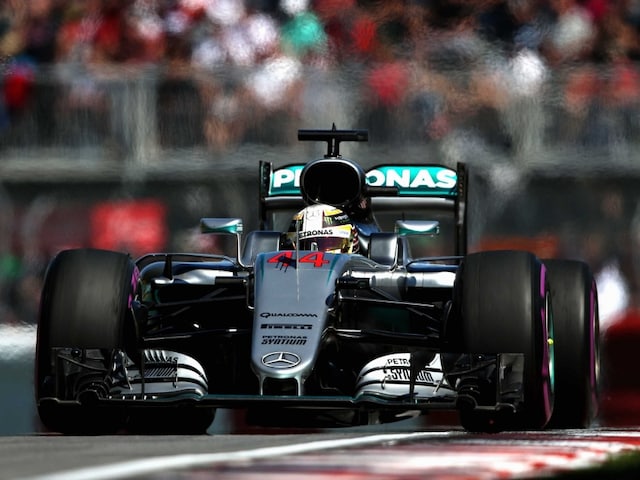 A revitalised Lewis Hamilton kept Mercedes on top in Friday practice for this weekend's Canadian Grand Prix with a dominant display as rival teams Ferrari and Red Bull closed in on the championship pace-setters.

The defending three-time champion, who won for the first time in seven months at the Monaco Grand Prix to trim team-mate Nico Rosberg's championship lead to 24 points, was at his confident best at the Circuit Gilles Villeneuve.

Hamilton clocked a best lap of one minute and 14.212 seconds to outpace nearest rival four-time champion Sebastian Vettel, in a Ferrari powered by an updated engine, by 0.257 seconds.

"It's been an awesome day," said Hamilton. "This has always been a strong circuit for me and I'm really enjoying being back here again. I've generally been really happy with the car so far. Our focus has been on working to make sure we have a good understanding of the tyres. I'm enjoying myself and hoping the weather stays like this."

It was the nearest Ferrari have been to catching Mercedes, in a Friday practice session, since the Chinese Grand Prix in April.

"The car seems to work here," said Vettel. "There's nothing wrong and all the bits that we brought seem to give us what we expected. That's good news for us."

A confident Vettel added that he was hoping for better than second place in Sunday's race.

"I don't want to split the Mercedes," he said. "I want to be ahead of them. But they will be very quick and the circuit suits them."

Hamilton has won four times in Montreal and clearly relishes driving at the circuit where he claimed his maiden victory in 2007.

Rosberg was third quickest, half a second adrift of Hamilton's best time, but ahead of Dutch teenager Max Verstappen in the leading Red Bull and his team-mate Daniel Ricciardo.

Rosberg said: "I'm feeling good in the car, but getting the tyres to work is not so straightforward here. It needs more analysis tonight."

Australian Ricciardo, bouncing back from his disappointment in Monaco where he was deprived of a possible victory by a bungled pit-stop, said he believed Red Bull were in better shape than it appeared.

"They had a good buffer on us today but we've got a bit more to come from all areas tomorrow," he said.

"So if we're within half a second tomorrow that would be decent and then you never know what happens in the race."

Valtteri Bottas was sixth for Williams ahead of a revived and determined Jenson Button, the Briton driving with great elan in his McLaren Honda as rumours about his future swirl around him in the paddock.

Kimi Raikkonen was eighth in the second Ferrari ahead of Nico Hulkenberg of Force India and Spaniards Carlos Sainz in his Toro Rosso and two-time champion Fernando Alonso in the second McLaren.

"It was a far from ideal day," said Raikkonen. "We struggled to make any sense of the car."

Brazilian Felipe Massa who crashed heavily during the morning session in his Williams was down in 13th in the afternoon.

Comments
Topics mentioned in this article
Lewis Hamilton Nico Rosberg Canadian Grand Prix Montreal Formula 1
Get the latest updates on IPL 2020, check out the IPL Schedule for 2020 and Indian Premier League (IPL) Cricket live score . Like us on Facebook or follow us on Twitter for more sports updates. You can also download the NDTV Cricket app for Android or iOS.