Two-time champion Alonso said he still believed that a podium finish was possible, but hoped for dry conditions after Saturday's rain-swept dramas at the Circuit Gilles Villeneuve. 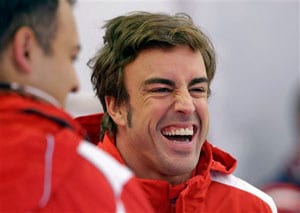 Fernando Alonso and Ferrari remained hopeful, if philosophical, after the Spaniard qualified sixth on the grid and team-mate Felipe Massa crashed again ahead of Sunday's Canadian Grand Prix.

Two-time champion Alonso said he still believed that a podium finish was possible, but hoped for dry conditions after Saturday's rain-swept dramas at the Circuit Gilles Villeneuve.

"In the dry, we were very competitive," he said. "This year, every time we are competitive, it rains in qualifying.

"We start sixth with mixed cars at the front and it gives us the possibility to have a good race and hopefully finish on the podium.

"Sebastian (Vettel) starts at the front and we need a perfect race to finish ahead of him."

"Unfortunately we are not able to generate enough temperature in the tyres," he said.

"We need to try and do the maximum tomorrow. Everything is possible if the conditions are good. The long-run pace was good on Friday, I hope it will be the same on Sunday."

Massa crashed out of Q2, but was unhurt.

Vettel of Red Bull, the defending triple world champion and leader of this year's title race, took pole for the third time this season.

Vettel, with 107 points, leads the championship ahead of Finn Kimi Raikkonen of Lotus on 86 and Alonso on 78.