Mercedes driver Lewis Hamilton, who is 29 points behind German team-mate Nico Rosberg in the Formula One drivers' championship, believes he has the talent to triumph again - as he did in 2008 - and use that success as a launch-pad to his second title. 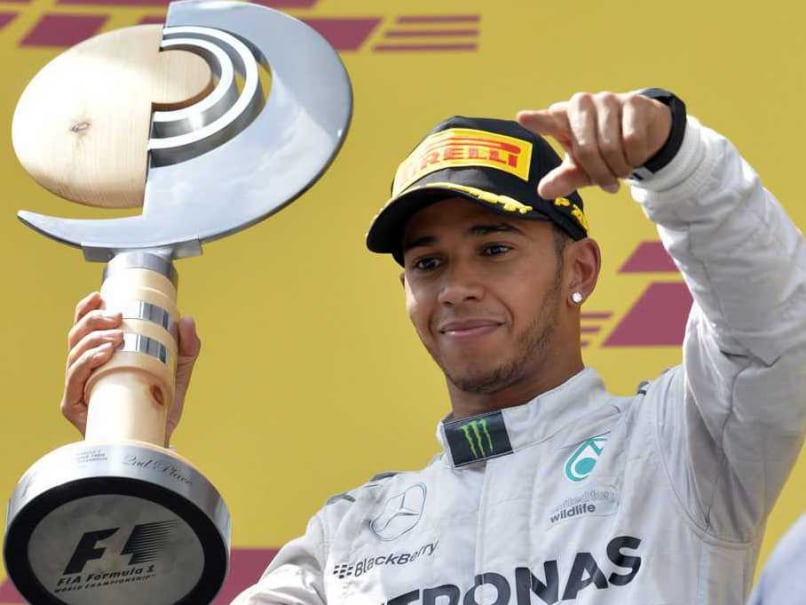 Second placed Mercedes' British driver Lewis Hamilton holds his trophy on the podium after the Austrian Formula One Grand Prix at the Red Bull Ring in Spielberg on June 22, 2014.© AFP
Silverstone, United Kingdom:

Lewis Hamilton heads into his home British Grand Prix this weekend bidding for a victory that could revive his title challenge and prove that his Mercedes team retain a speed advantage over their rivals.

The 29-year-old, who is 29 points behind German team-mate Nico Rosberg in the drivers' championship, believes he has the talent to triumph again - as he did in 2008 - and use that success as a launch-pad to his second title. (Also read: Mercedes' Nico Rosberg wins Austrian Grand Prix, teammate Lewis Hamilton finishes second)

"I know that I'm 29 points down now, but even though I've not finished as many races as I would like -- and I lost another seven points to Nico in Austria -- there's still a long way to go," said Hamilton.

"I had a lot of pace in Austria, and although I didn't capitalise on it, I'll take it into the British Grand Prix and make sure I do. I'm excited about our pace. I'm going to Silverstone with the best package I've ever had, so I'm thrilled about that.

"I just have to execute that pace over a weekend, so I will work hard to make sure I do that. I believe I have the ability so I just have to harness it all and do my utmost."

Hamilton has suffered two retirements this season while Rosberg has finished in the top two in all eight races to date, to demonstrate that the consistent man can often outscore a faster rival who wins more often, but also fails to finish.

In Austria 10 days ago, Hamilton was twice on course for pole position, but his own errors cost him dearly and he ended up starting ninth, to Rosberg's third, as Mercedes failed to have a car on the front row for the first time this year.

Hamilton came home second behind Rosberg and said: "I'm happy I managed to recover that weekend. I earned my money, so that was good...

"Now I need some better luck, but I am not counting on it. Not at Silverstone or anywhere else. I just have to go out and do the job."

A year ago at Silverstone, Hamilton took pole by half a second and led the race easily before he became the first of five drivers who suffered spectacular tyre failures. He finished fourth.

"I think that was my best chance of another win and I should have won that one," said Hamilton. "I have definitely had my fair share of bad luck, that's for sure, so hopefully moving forwards positive things will happen.

"At least in going to the British Grand Prix - for any athlete going into an event in their home country - performing for the fans and the support you have is significantly more than any other place you go.

"It's just the most incredible feeling, particularly with the difference you can make to those individuals' weekends. When I won the race in 2008, I had so many messages of support. Even today, people tell me their dream came true that weekend.

"That's a real positive. Lots of positives come from these events so I'm excited to be going back there this weekend and I am going to do it my way. I can't expect Nico to suffer retirements or anything like that.

"I just have to focus on doing better than him, which I am capable of - and I believe that. For me, the edge I have is in my ability. That is the gift I have and I have to use it this year more than ever."

As the two Mercedes men continue their apparently private battle for the title, team chief Niki Lauda warned that they all need to keep pushing to ensure that the outfit stay ahead of the field.

One rival, Williams driver Felipe Massa, believes that Hamilton can feed of the energy of an expected 125,000 home crowd to win on Sunday.

"That pressure from racing at home can give you more energy," the Brazilian said.

"I have that when I race in Brazil. It works on the track because I am always strong there. Maybe with the support Lewis will have this weekend, he can have the same feeling as well."

Comments
Topics mentioned in this article
British Grand Prix Lewis Hamilton Nico Rosberg Mercedes Formula 1
Get the latest updates on ICC Women's Cricket World Cup 2022 and IPL 2022, check out the Schedule , Live Score and IPL Points Table. Like us on Facebook or follow us on Twitter for more sports updates. You can also download the NDTV Cricket app for Android or iOS.