Valtteri Bottas secured the third pole position of his career on Saturday after his Mercedes team-mate Lewis Hamilton had crashed in the opening minutes of an incident-filled qualifying session for Sunday's Brazilian Grand Prix. 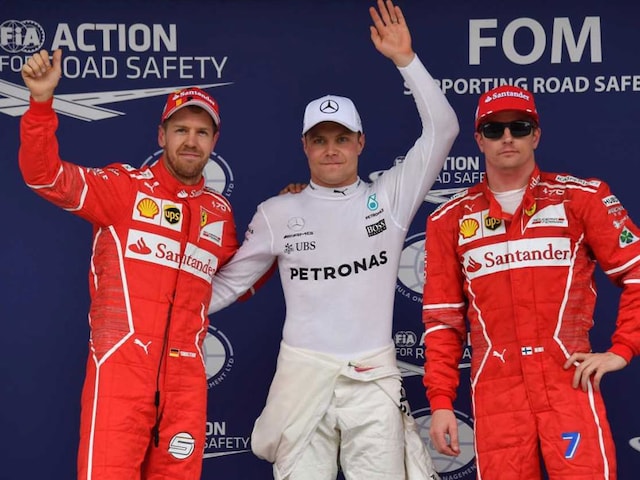 Bottas said he felt a responsibility to the team after Hamilton's shock early exit.© AFP

Valtteri Bottas secured the third pole position of his career on Saturday after his Mercedes team-mate Lewis Hamilton had crashed in the opening minutes of an incident-filled qualifying session for Sunday's Brazilian Grand Prix. The Finn clocked a best lap time of one minute and 8.322 seconds in the final seconds to outpace his nearest rival four-time champion Sebastian Vettel of Ferrari by 0.038 seconds. Hamilton, who clinched his fourth title in Mexico two weeks ago, lost control and hit the barriers on his first flying lap after only two minutes. He was unhurt and is expected to start the race from the back of the grid.

"I'm okay. It happened really quickly. I tend to just look at it as challenges are what makes life interesting and overcoming them makes life meaningful," Hamilton told Sky Sports.

"I just need to take whatever bubble of negativity comes from that experience and move forwards and try and grow from it.

"It's very unusual from me but it shows we are all human and things happen."

Hamilton's crash and Bottas's pole completed a roller-coaster Saturday for the world champion Mercedes team after it was revealed some of their staff had been robbed at gunpoint late Friday as they left the Interlagos circuit.

Bottas said he felt a responsibility to the team after Hamilton's shock early exit.

"It feels good," said Bottas, who also took pole at the Azerbaijan and Austrian Grands Prix earlier this season.

"I am still a bit shaken, but it is a good feeling. It was a nice lap, but it was close with Sebastian (Vettel).

"It was a shame that Lewis is out, a shame for us, but I stood up for the team and it is good to start from pole position here."

Another Finn Kimi Raikkonen qualified third in the second Ferrari ahead of Max Verstappen and his Red Bull team-mate Daniel Ricciardo, who faces a grid penalty for the race.

Vettel, who is 15 points ahead of third-placed Bottas in the title race, admitted he did not commit fully to his lap.

"I think I chickened out a bit on the brakes on the last lap going into Turn One," he said.

Comments
Topics mentioned in this article
Mercedes Ferrari Lewis Hamilton Valtteri Bottas Formula 1
Get the latest Cricket news, check out the India cricket schedule, Cricket live score . Like us on Facebook or follow us on Twitter for more sports updates. You can also download the NDTV Cricket app for Android or iOS.