Bernie Ecclestone and Formula One, the Mutually Dependent Partners

Bernie Ecclestone's management of F1 since the 1980s, more specifically its promotion and commercial rights, has generated huge revenue to the sport and created thousands of jobs both in Britain and elsewhere. 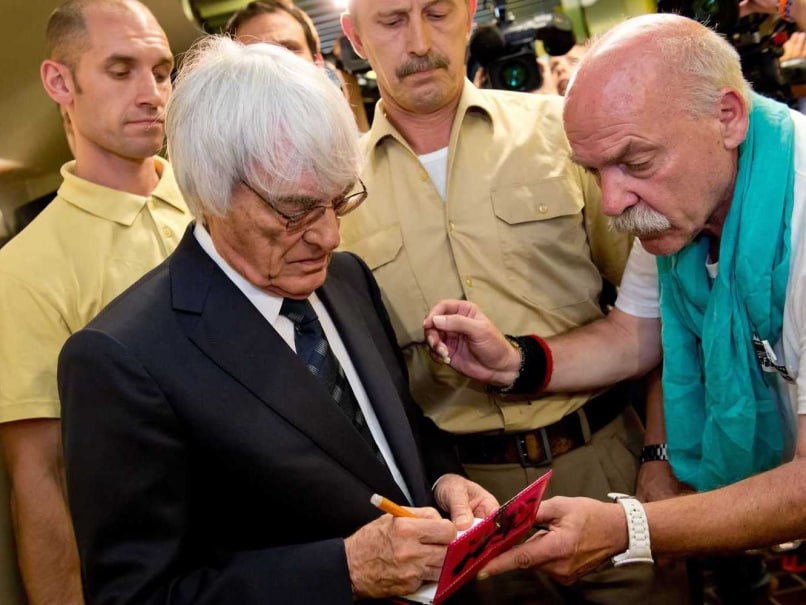 Formula One Chief Executive Bernie Ecclestone signs an autograph after leaving the courtroom at the regional court in Munich, southern Germany, on August 5, 2014.© AFP
Paris:

It is not just Bernie Ecclestone who would likely have breathed a sigh of relief at the end of his bribery trial following the payment of a $100 million (74.65m euros) settlement, but also the entire Formula One paddock. (Ecclestone Trial Halted After F1 Boss Agrees to $100 Million Settlement)

The acceptance by a German court in Munich of Ecclestone's reported record accord of its kind allows the 83-year-old billionaire to maintain his 35-year grip on F1.

Ecclestone had faced a potential 10-year jail sentence had he been found guilty of paying a $44 million bribe to German banker Gerhard Gribkowsky to ensure a company he favoured bought a stake in F1.

He would have been forced out of his position as the president and CEO of Formula One Group, and hence take his significant share with him.

The potential turmoil that would have brought to the sport is difficult to quantify but the reaction from those in the paddock to Ecclestone's predicament speaks volumes.

No-one in the paddock is ever heard to utter a bad word about the F1 patriarch with the taste for gorgeous young models who tower over his diminutive frame - his current and third wife Fabiana Flosi is 46 years his junior and almost a head taller.

Ecclestone's management of F1 since the 1980s, more specifically its promotion and commercial rights, has generated huge revenue to the sport and created thousands of jobs both in Britain and elsewhere.

Despite problems regarding the level of competitiveness amongst the various teams and the often processional nature of its races, F1 manages to create interest and earn money, ensuring its principal protagonists are paid huge sums.

No-one dare complain about Ecclestone's dictatorship and team owners have not stopped offering soundbites such as "Bernie is indispensible to F1" as the circus visits the four corners of the earth on its 20-stage tour.

The 1.59m chief has not let the furore surrounding his case stop him from continuing to push F1 towards greater security, sustainability and profitability, extending the contracts for the Australian and Canadian Grand Prix and announcing the return of Mexico to the calendar, all while his lawyers worked frantically behind the scenes to provide him with a get-out clause to his Munich troubles.

Crucially, while the process was hanging over his head, Ecclestone was unable to verify those moves, meaning the future of three GPs were dependent on him successfully extrapolating himself from the corruption accusations, ensuring some influential people were rooting for him.

Ecclestone has made a lot of friends with the expansion of the F1 calendar over recent years from 16-17 to the peak of 20 during the 2010 season.

Austria has returned to the calendar this year while Sochi will make it's bow later in the season and Azerbaijan will be a new edition with a Baku GP in 2016.

On the contrary from potentially losing his control of F1, Ecclestone is rumoured to be considering buying back a majority share. He currently owns 5.3 percent while his family trust Bambino has another 8.5 percent but the British magnate is now looking into the possibility of purchasing back the 35.5 percent stake held by CVC Capital Partners (although perhaps not without the help of some wealthy friends).

"I've spoken to (CVC president) Donald Mackenzie and I'm looking at it," he told the Daily Express last month.

"It is possible, although one or two other companies are interested and I would not enter an auction. Age does not make it impossible. I feel no different to how I did 40 years ago."

That is perhaps as telling a statement as any.

If at 83 and with his recent legal problems, Ecclestone still feels the same energy and motivation he had before taking control of F1, what, if anything, could stop him doing so again.

Yet he admits he would need some help, not that he considers that a problem.

"You can make money from it, so it would not be a problem for me to find financial backers," he added.

Several names have been circulating in the press including press consortiums BSkyB and Liberty Media as well as billionaires Lawrence Stroll, Rupert Murdoch and Dietrich Mateschitz.

Anything is possible because if there is one thing Tuesday's ruling in Munich showed, 'Uncle Bernie' has more than one trick up his sleeves.