Sebastian Vettel said he was relieved to be "back at work" following a difficult few days after he posted the fastest time for Ferrari in second practice for this weekend's Hungarian Grand Prix. 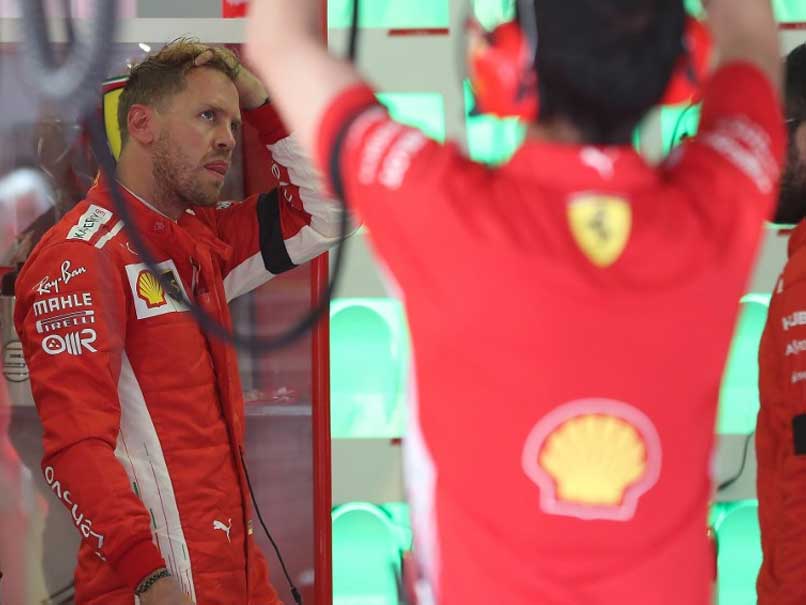 Sebastian Vettel clocked a fastest lap in one minute and 16.834 seconds.© AFP

Sebastian Vettel said he was relieved to be "back at work" following a difficult few days after he posted the fastest time for Ferrari in second practice for this weekend's Hungarian Grand Prix. The German bounced back following an embarrassing 'home' exit in last Sunday's German race and the death on Wednesday of Ferrari chairman Sergio Marchionne by outpacing both Red Bulls. "I think it is probably best to get in the car because everybody knows what to do," he said.

"Obviously, it was not easy, but I think today the work has been ok. Having a lot of work in front of you is probably the best thing to get your head away and focus on the job we have to do here.

"It is probably quite good to have a race straightaway and focus on the next thing to do."

In a car that carried a black diagonal stripe in memory of Marchionne, who died earlier this week, the German delivered consistent speed in stifling heat at the Hungaroring.

He crashed out of last weekend's German Grand Prix after leading until a rainstorm created treacherous conditions in which title rival Lewis Hamilton excelled as he stormed to victory from 14th on the grid.

Vettel acknowledged that he had to overcome some emotional and mental strain in recent days.

The German, who trails fellow-four-time champion Hamilton by 17 points in the title race, added that he was happy with his day's work.

"It has been one of our better Fridays," he said.

Vettel clocked a fastest lap in one minute and 16.834 seconds, enough to keep him 0.074 seconds clear of his rivals in a tight session that saw most of the field struggling for grip.

Monaco 'without houses and walls'

Max Verstappen was second fastest ahead of his Red Bull team-mate Daniel Ricciardo, Kimi Raikkonen in the second Ferrari and Hamilton, who was fifth ahead of his Mercedes team-mate Valtteri Bottas.

Romain Grosjean was seventh for Haas ahead of Carlos Sainz of Renault and Pierre Gasly of Toro Rosso and Esteban Ocon of Force India.

Vettel added: "Qualifying is very important here for the start as overtaking is very difficult. Whoever is ahead after the first couple of corners, that will be crucial.

"I was happy this afternoon, it was better than the morning and we are ok for one lap. It has been one of our better Fridays."

Asked how he felt following his crash last Sunday and the death of Marchionne, he added: "Probably it's good to have a race straightaway and to get my head straight and to focus on the next thing to do. It's a way to cancel it all out and forget it all properly."

Ricciardo was fastest for Red Bull in the morning session, but was frustrated by traffic in the afternoon when many drivers complained of slower cars blocking their runs.

Vettel was fastest early on and was succeeded by Bottas, Hamilton, Bottas again and then Verstappen before he resumed on top of the times in the closing period.

Red Bull were expected to challenge at the right and twisty circuit that has been compared to Monaco "without houses and walls" but Verstappen said he anticipated a "difficult" weekend.

"The car was good," he said. "But we still lose quite a lot on the straight unfortunately. It's difficult to say at the moment. I think we can improve our car a little bit more, but if it's going to be good enough for pole position -- I'm not sure."

He added that Mercedes were more competitive than it appeared because their drivers -- Hamilton and Bottas -- had not been able to record true times.

"They couldn't get a lap on the 'ultra' and they both went a bit wide or whatever so I'm expecting them to be there.

"Ferrari looks quick. In the long run, Mercedes look competitive as well so it will be very close and it all depends on qualifying."

Sebastian Vettel Formula 1
Get the latest updates on India vs Australia Series, check out the India vs Australia Schedule for 2020-21 and Ind vs Aus live score . Like us on Facebook or follow us on Twitter for more sports updates. You can also download the NDTV Cricket app for Android or iOS.