Vettel was penalised for dangerous driving after deliberately crashing into Hamilton as Red Bull's Ricciardo won the title in Baku. 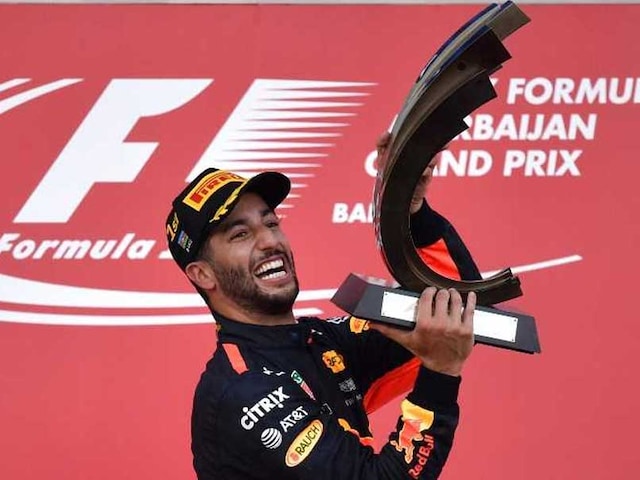 Despite Ricciardo's win, the race will be remembered for the angry confrontation between former world champions Vettel and Hamilton.

Ferrari star Vettel was handed a 10-seconds stop-go penalty during the race for "dangerous driving" after he deliberately drove into Hamilton's Mercedes while both were following the safety car.

Vettel claimed Hamilton had braked in front of him and he responded by driving into the back of his rival before then bumping the Briton from the side.

"I think it's just not driver conduct. It's dangerous driving and to get a 10-second penalty for that... I don't need to say anything else," Hamilton told Sky Sports.

"Nothing happened, did it? He brake checked me as well, so what do you expect?," the German told Sky. "I'm sure he didn't do it on purpose but for sure it was not the right move. If I'm struggling, people at the back struggling even more, so I don't think it was necessary. I got damage, he risked damage. He's done something similar in China at the restart a couple of years ago so it's not the way to do it, I think. I passed him because he pitted. After the incident, we were side by side, I raised my hand and told him, well I didn't say anything, but showed him that I wasn't happy with that."

Making the most of a series of extraordinary incidents and interventions in an action-packed race, which included three safety car interventions and a red-flagged stoppage, Ricciardo, who started 10th, roared home 3.904 seconds ahead of the rest to deliver his first win of the season.

Esteban Ocon of Force India was sixth ahead of Kevin Magnussen of Haas, Carlos Sainz of Toro Rosso, who also survived a first-lap collision, two-time champion Fernando Alonso, who scored McLaren's first points of the year in ninth, and Pascal Wehrlein of Sauber.

Hamilton, who had dominated after a strong start from his 66th pole position, was also undone by a loose headrest that caused him to be ordered to pit for repairs, for safety reasons.

Bottas meanwhile produced a brilliant drive to take his fifth podium finish of the season, having dropped to the back of the field after a first-lap bump with fellow Finn Kimi Raikkonen.

Comments
Topics mentioned in this article
Red Bull Ferrari Mercedes Daniel Ricciardo Lewis Hamilton Sebastian Vettel Formula 1
Get the latest Cricket news, check out the India cricket schedule, Cricket live score . Like us on Facebook or follow us on Twitter for more sports updates. You can also download the NDTV Cricket app for Android or iOS.