Ayrton Senna, the Formula One legend who really cared

Ayrton Senna won three Formula One titles - in 1988, 1990 and '91 - all with McLaren. He moved to the Williams team for his tragic 1994 season. Despite his career being cut short when he was 34, his 41 wins stand third all-time behind Michael Schumacher's 91 and rival Alain Prost's 51.

Ayrton Senna da Silva: is his legacy to be recalled in statistics or memories? Numbers on a page or emotions stirred? Sporting supremacy -- or rare humanity? 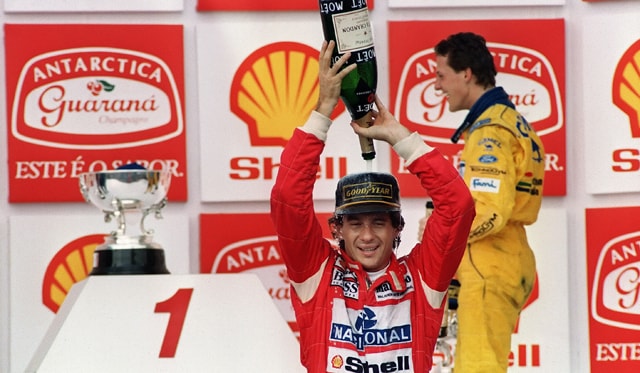 The stories of his on-track talent, the utter determination and all-consuming passion are well chronicled. Indeed, 161 Grands Prix, 64 pole positions and 87 front row starts reflect all that. To cap it all off 42 Grands Prix victories and three world titles - in 1988, 1990 and 1991. (Senna's 20th death anniversary)

His fierce rivalry with McLaren-Honda team-mate Alain Prost, concern for drivers' safety and the humility that was so visible with children and ordinary motor racing fans confirm the passion and personality of a man whose death 20 years ago, in 1994, will be remembered again, and so vividly, on May 1.

That afternoon, at Imola, capped a tragic, black weekend at the San Marino Grand Prix, where he started his final race from pole position.

Saturday's qualifying had brought the brutal death of Austrian Roland Ratzenberger, a shock that sent a shudder of apprehension and misery through an overcrowded paddock.

Friday had seen Senna rush to the bedside of his protégé Rubens Barrichello, then only 21 and in his second season of Formula One, after he had survived a massive airborne crash during afternoon practice. It was the first huge shock. And Sunday delivered more.

But in this anniversary year, as Honda prepare their comeback, it is Senna the man that many, including this correspondent, will remember: the smiles, jokes and kindnesses that were a part of his unique charisma along with the intensity and single-minded passion.

Memory can play tricks on us, but not when so many remember the same things at the same place.

In a rush at the Hungaroring in 1987, he stopped to answer a question with a serious frown. In Lotus overalls, he smiled and then ran on to catch lost time.

Later that year, at Monza, he shuffled shyly in slanting late-summer sunshine as he stood with Prost at a McLaren announcement to confirm the formation of a dream team - Prost and Senna, McLaren and Honda.

In Paris, where the sport's ruling body celebrated 500 Grands Prix, he agreed to sign, for my son, a menu printed for the occasion. 'Joshua? How do you spell that?' he asked after mistaking the name for George, more common in English at the time. He duly signed and remembered.

And then after another championship season was over, passions spent, in Adelaide. Inside the David Jones department store, descending by floors, I walked into a scene to behold - Senna, who had been at the centre of a stormy season, contemplating a pile of stacked trunks in the luggage area.

"Hey, you again!' he grinned. "I don't always agree with you. But I respect what you write and your opinion, your view." A warm handshake and even warmer smile followed. "So, how is J-o-s-h-u-a?"

The memory endorsed the warmth of this man's heart.

"What are you doing? What do you want all these trunks for?' he was asked.

To answer, he produced a piece of paper on which was a list of names and shoe sizes. It was a very long list, including the identity of at least 75 people who worked for him, in his organisation to help the poor and underprivileged people of Sao Paulo.

"I need these big cases,' he explained. "To pack the shoes for my people, I come here myself and choose the shoes. They are put in them and then we send them back to Brazil. Everyone has a pair chosen by me."

He smiled again. Not at his own satisfaction, but at the prospect of delighting a compatriot on the other side of the world.

It was a simple story of Senna's way of living, an insight into the man and a memory that has helped construct a lasting legacy of his individuality. He cared.

And that is why at other times and other places, he was seen to boil with rage, pour forth with profanities, take risks that others could not understand or drive with such sublime sensitivity and speed that he appeared untouchable and unequalled.

Consumed by passion in racing, he embodied that spirit which the greatest champions have always articulated for motor sport. Consumed by compassion, in other parts of his life, he is still remembered by some of us for that most important quality. Senna cared.