Australians Dressed Down For Stripping at Malaysian Grand Prix, But Case Dismissed 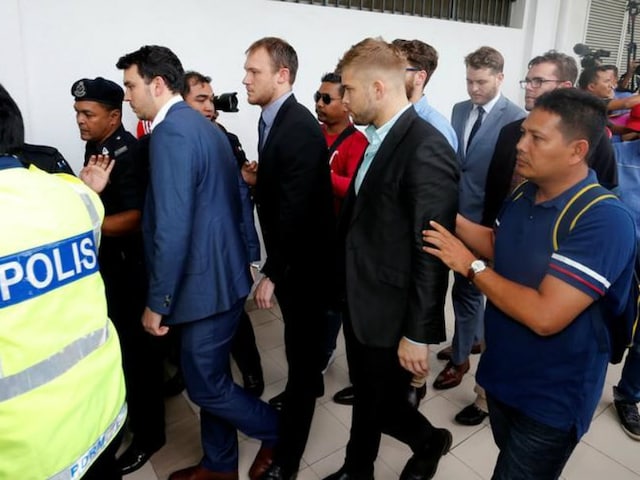 Australian men, part of a group of 9 were detained for stripping to their underwear at the Malaysian GP.© Reuters

A Malaysian court on Thursday dismissed a case against nine Australians arrested for stripping down to their swim wear at last Sunday's Malaysian Formula One Grand Prix.

Photos and videos of the men drinking beer from their shoes while wearing swimming trunks printed with the Malaysian flag prompted an outcry on social media and in the Malaysian press, with one official deeming it an "indecent act".

The men had initially pleaded guilty to a public nuisance offence, but judge Harith Sham Mohamed Yasin of the Sepang Sessions Court dismissed the charge with a stern warning.

Stripping in public at an international event had "provoked the sensitivities of Malaysians" and the symbols of the Malaysian national flag represented not only its people but also Islam, Harith said.

"Let this serve as a reminder to all of you to learn about our local cultures and customs," he said. "What is perfectly acceptable in your country is not necessarily acceptable in other countries."

Defence counsel Muhammad Shafee Abdullah had argued in mitigation that some of the nine were part-time beach lifesavers and that stripping down to their swimming trunks was "second nature" to them.

One of the men, Thomas Whitworth, 28, also read out a letter of apology on behalf of the group.

"We are remorseful of our actions on that day. We had no idea that our conduct would be deemed to be inappropriate, crass or even downright offensive to the citizens of this country," he said.

The group had been celebrating after Australian Daniel Ricciardo claimed his maiden Formula One win of the season, imitating the driver's famous "shoey" manoeuvre by drinking from their footwear.

Last year, four Western tourists were fined and deported from Malaysia after posing naked on Mount Kinabalu in Sabah, angering locals who consider the mountain sacred.

© Thomson Reuters 2016
Comments
Topics mentioned in this article
Malaysian Grand Prix , 1900-01-01 , Malaysia Sepang , 1900-01-01 , Malaysia
Get the latest Cricket news, check out the India cricket schedule, Cricket live score . Like us on Facebook or follow us on Twitter for more sports updates. You can also download the NDTV Cricket app for Android or iOS.