Lewis Hamilton knocked out his rivals with a blistering time of one minute 21.164 seconds to claim his 73rd career pole. 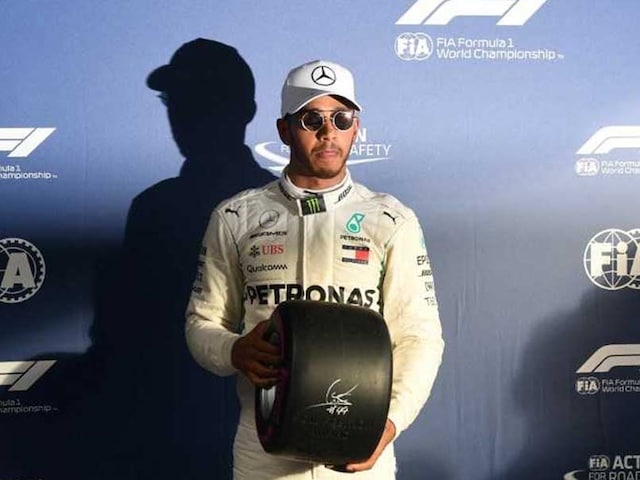 Mercedes world champion Lewis Hamilton produced a sizzling final lap to grab pole position for the season-opening Australian Formula One Grand Prix in Melbourne on Saturday. The four-time world champion knocked out his rivals with a blistering time of one minute 21.164 seconds to claim his 73rd career pole. The Ferrari duo Kimi Raikkonen and Sebastian Vettel finished second and third with Red Bull's Max Verstappen in fourth. Hamilton delivered a special flying lap to put a stunning 0.664sec gap on Raikkonen and clinch the pole for Sunday's opening race of the season.

His blistering pace shows he will be the one to beat and helped offset a spectacular crash of his Mercedes team-mate Valtteri Bottas early in the final shootout.

"I'm so happy with that lap. It was such a nice lap," Hamilton said.

"I'm always striving for perfection and that was as close as I could get.

"What was surprising was to see how quick the Ferraris were.

"During that lap I was in the same modes as before but it was hooking up the tyres and getting the lap together."

Raikkonen, who will also start off the front row in Sunday's race, conceded that the gap with Hamilton was significant.

"It was a pretty decent job. Obviously the lap time difference is quite big," the Finn said.

"It wasn't a straight-forward session with the rain this morning.

"We have to be pretty happy with where we are starting, but there is an awful lot of work to be done to improve things."

Vettel added: "Shame that Lewis had quite a big gap at the end but I guess his lap was pretty good.

"Looking forward to tomorrow, I think we improved the car and we'll see what happens tomorrow.

"It's very close, we saw yesterday on the long runs that pace is very close. It's not the easiest place to overtake but who knows.

"We have an opportunity at the start and the race, who knows. I'm really happy for the team, it's a good result. Let's get going."

Bottas' crash brought out the red flag to halt Q1 after he ran wide on turn two and slammed into the wall, dislodging a wheel in the collision.

He was uninjured and was taken back to the pits in the course car.

The shunt tore the rear wing from the car and destroyed the right-side suspension, leaving a massive overnight repair job for the Mercedes crew.

Australia's big hope Daniel Ricciardo, who went into qualifying with a three grid place penalty after a red flag infringement in practice, finished sixth in Q1.

"I thought (the grid penalty) was unjust. A penalty sure, there are reprimands, fines, other things but to shoot me in the ankle before the season has started - I thought they could have done better," Ricciardo said.

"We're starting on the supersofts and hopefully that works to our favour and later in the race we can make some things happen."

McLaren's Fernando Alonso was a major casualty in Q2, finishing 11th fastest and missing out to Renault's Nico Hulkenberg.

Others to miss out in Q2 were Alonso's teammate Stoffel Vandoorne, Sergio Perez, Lance Stroll and Esteban Ocon.

Hamilton topped Q3 with 1:22.824 ahead of Ferrari's Raikkonen and Vettel.

Sauber's Marcus Ericsson was among those who failed to get out of Q1 along with Brendon Hartley, Charles Leclerc, Sergey Sirotkin and Pierre Gasly.

Comments
Topics mentioned in this article
Ferrari Mercedes Lewis Hamilton Sebastian Vettel Kimi Raikkonen Australian Grand Prix
Get the latest Cricket news, check out the India cricket schedule, Cricket live score . Like us on Facebook or follow us on Twitter for more sports updates. You can also download the NDTV Cricket app for Android or iOS.