The McLaren driver was phenomenal behind the wheel as he ensured that he kept the two Red Bulls well behind him in the times posted at the Yas Marina circuit. Sebastian Vettel meanwhile has his work cut out even more now with the unfortunate blow. 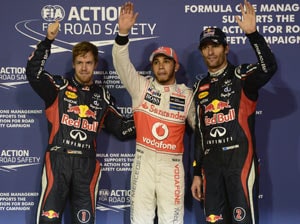 A supremely-dominant Lewis Hamilton crushed all his rivals on Saturday as he set up a Red Bull party-wrecking race in Sunday's Abu Dhabi Grand Prix by taking his sixth pole position of the season while a fuel issue saw season leader Sebastian Vettel demoted.

The 27-year-old Briton was simply untouchable as he steered his car to the fastest time in all three parts of the session, finishing with an outstanding best time of one minute and 40.630 seconds.

Hamilton's best lap, clocked on his first run in the top ten shootout, was good enough to leave him three-tenths of a second clear of Vettel teammate Mark Webber who will share the front row with him for Sunday's 55-laps race at the 5.554 kms Yas Marina Circuit.

To make matters worse for Red Bull, defending champion Vettel, who had missed the front row by qualifying third on the back of technical problems, was demoted and will start from the back of the field after he did not have sufficient fuel left in his tank for a fuel sample to be taken. ( Read full report: Vettel demoted for Abu Dhabi GP)

Vettel's main title rival, Fernando Alonso of Ferrari, endured a frustrating session - though the Spaniard was bumped up a place to sixth after Vettel's demotion.

Williams's Pastor Maldonado will start the race third, ahead of Kimi Raikkonen of Lotus, McLaren's Jenson Button and Alonso.

Hamilton's pole was his sixth this year and the 25th of his career on a circuit that he clearly responds to with great elan -- and gives him a perfect opportunity to upset the Red Bull express and end Vettel's run of four consecutive wins in pursuit of his goal of becoming F1's youngest triple world champion.

Hamilton, whose father Anthony has been with him in the paddock, said: "I'm very excited. It's the first time for a long time to be ahead of the Red Bulls and starting at the front.

"It's going to be tough in the race and I hope we are strong enough to fight them once again. The car's felt beautiful all weekend but we've not made any improvement since last weekend so I guess it just likes the track and hopefully it will continue to like it tomorrow."

Webber said: "Credit to Lewis and McLaren - they have a quick car and we've been bumped off the front row for the first time in awhile.

"We did the best we could, it was a pretty smooth qualifying and we're still a long way up the grid. There's a little bit of friendly fire going on which we need to tidy up. Seb's still involved in the drivers' championship and there's the constructors'."

Vettel, who takes part in his 99th Grand Prix on Sunday, said: "I dont know why I had to stop, I was asked to stop. It's probably some problem. It shouldn't be something major.

"This morning wasn't ideal not being able to run. Nevertheless, we were settling in quite well, the pace was there. McLaren, in particular Lewis, are pretty quick and were out of reach today.

"I'm not entirely happy with the last part of qualifying. It was quite tricky for me. I should have been a little quicker. I think we can be happy overall. The race pace should be good tomorrow. I'm looking forward to it."

Alongside Vettel on the second row is Williams' Pastor Maldonado who won his maiden F1 race at the Spanish Grand Prix earlier in the season.

He said: ""We have shown all weekend that we are quite competitive. I did my best in qualifying. The car was there, I'm happy for the team and happy for myself. I'm happy for tomorrow.

"We need to look at ourselves. Point will be important for us. I will push at the maxmium and we will see. I think we have strong pace and are competitive like the top teams."

Occupying the third row are Kimi Raikkonen and Jenson Button in the second McLaren, with Alonso sharing the fourth row with Nico Rosberg of Mercedes.

Comments
Topics mentioned in this article
Sebastian Vettel Red Bull Mark Webber McLaren Lewis Hamilton Formula 1 Abu Dhabi Grand Prix
Get the latest Cricket news, check out the India cricket schedule, Cricket live score . Like us on Facebook or follow us on Twitter for more sports updates. You can also download the NDTV Cricket app for Android or iOS.