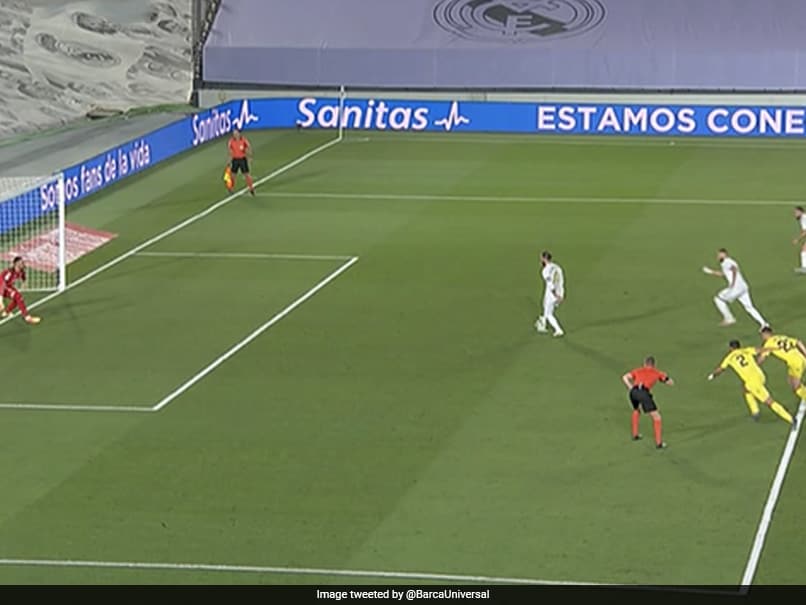 Real Madrid romped to their 34th La Liga title with a game to spare on Thursday. Barcelona needed a win against Osasuna to remain in the title race but suffered a shock 2-1 loss and Zinedine Zidane's men celebrated in style with a 2-1 victory over Villarreal, capturing the title with a game remaining. The match against Villarreal saw Karim Benzema add to his goal tally with a brace. The Frenchman now trails Barcelona star Lionel Messi (23) by just two goals in the race to become La Liga's top-scorer this season. Sergio Ramos is Real Madrid's designated penalty-taker, but instead of handing over the duties to Benzema in the match against Villarreal, so that he could go closer to Messi, Ramos tried to bizarrely pass a penalty kick to Benzema, which was disallowed by the referee.

The Frenchman had encroached into the area too early and therefore the goal didn't stand. Much to Villarreal's frustration, Real Madrid were allowed to retake and this time Benzema made no mistake to score his 21st goal of the league season.

Having already taken the title away from Barcelona, Ramos and Benzema were probably trying to steal the Catalans' thunder but things didn't go as planned.

Ramos and Benzema try to re create Barcelona's vingare goal but penalty is disallowed! pic.twitter.com/7Z4Pk4punK

This is not the first time something like this was attempted. Lionel Messi and Luis Suarez had successfully pulled it off in 2016.

This penalty routine was made famous in 1982 by the great Johan Cruyff and Jesper Olsen with the pair pulling it off while playing together for Ajax. However, the first recorded version of the penalty reportedly was as far back as 1957 when Belgium duo Rik Coppens and Andre Piters did a one-two with the former scoring.

In 2005, Arsenal duo Thierry Henry and Robert Pires tried to recreate the penalty routine but were left red-faced after making a complete hash of things.

Karim Benzema Football
Get the latest updates on IND vs NZ 2021, check out the Schedule and Live Score . Like us on Facebook or follow us on Twitter for more sports updates. You can also download the NDTV Cricket app for Android or iOS.