Real Madrid claimed their third La Liga title in 12 years, after a relentless run of form since Spanish football resumed on June 11 following the coronavirus pandemic. 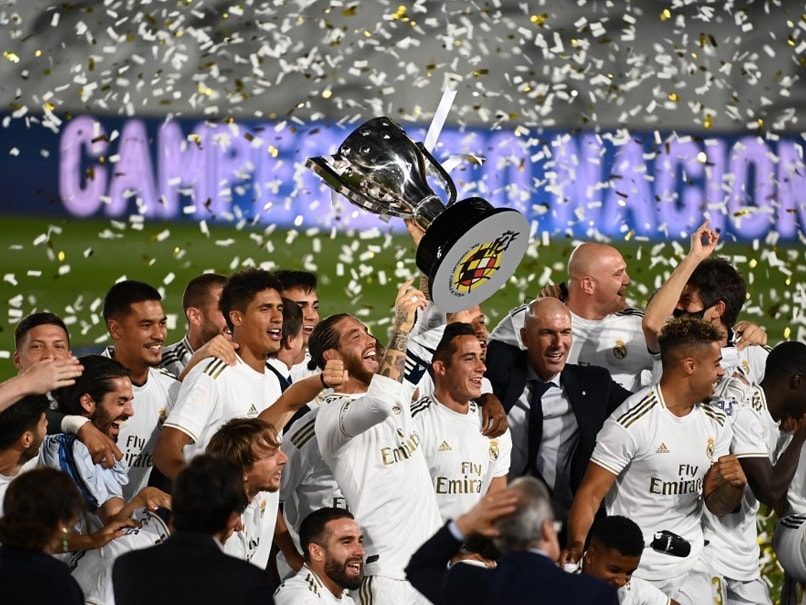 Real Madrid were crowned La Liga champions for the 34th time on Thursday after Karim Benzema scored twice in a 2-1 victory over Villarreal which clinched the title with one game to spare. Benzema's double included a second-half penalty at the empty Alfredo di Stefano Stadium as Madrid moved seven points clear to end Barcelona's two-year hold on the trophy. Barca had to prevail against Osasuna at home and hope Madrid slipped up but their fading challenge ended with a 2-1 defeat at Camp Nou, despite a brilliant Lionel Messi free-kick.

It means Madrid claim their third La Liga title in 12 years, after a relentless run of form since Spanish football resumed on June 11 following the coronavirus pandemic.

Zinedine Zidane's side have won 10 games out 10 since the restart. They have conceded four goals in that time and never been behind in a match.

"For me this is one of the best days in my professional career," said Zidane. "After lockdown and everything, it's astonishing."

Asked if it trumps the Champions League titles Madrid won in his first spell as manager, Zidane said: "This is better than anything. It takes a tremendous effort to win La Liga. After 38 matches, you have more points than anyone else. It's bloody fantastic."

Madrid have also been awarded five penalties during the run-in, some of them controversially, and this one caused a stir too as Sergio Ramos tried to roll the ball to Benzema, who finished, but had entered the area too early.

Much to Villarreal's irritation, Madrid were allowed to retake and this time Benzema made no mistake, before Vicente Iborra headed in what proved a late consolation.

Setien under pressure at Barca

After three months away, Barcelona had returned sitting top of the table but draws with Sevilla, struggling Celta Vigo and Atletico Madrid allowed Madrid to take charge.

Barca were also in first place when they sacked Ernesto Valverde in January and while the club's problems go deeper than their coach, Quique Setien's position will come under scrutiny.

"Things have to change," said Messi. "Everyone here in the club will be feeling very angry about what has happened this season and that's normal. The players feel like that too."

Messi added: "We have to be self-critical, starting with the players, but across the whole club."

Barcelona president Josep Maria Bartomeu said this week that Setien will remain in charge for next month's Champions League tie against Napoli but the coach's  decision to leave Luis Suarez out of the starting line-up for a second consecutive game will raise questions.

Yet few could argue Madrid deserve the title and it was fitting that Benzema delivered it, his double taking his tally for the season to 26 in all competitions.

His first came after 28 minutes when Casemiro stole possession in midfield and freed Luka Modric. He slid through Benzema, who fired through the legs of Sergio Asenjo.

Ramos had scored five goals himself since the restart and could have had a sixth after he was tripped by the dangling leg of Sofian Chakla.

But his ploy to tee up Benzema backfired when his teammate encroached too early. Benzema converted the re-take.

Iborra headed in Mario Gaspar's cross to set up a nervy finish but Barcelona were still being held by Osasuna.

Messi's curling free-kick into the top corner had cancelled out Osasuna's opener from Jose Arnaiz, once of Barca B.

But Osasuna had a final trick up their sleeve as Roberto Torres finished at the back post to wrap up Barca's miserable night at the end of a turbulent season.

Real Mallorca's hopes of survival are over after they lost 2-1 at home to Granada but Alaves guaranteed their safety by winning at Real Betis.

With Espanyol already down, the final relegation spot will be between Celta Vigo, who lost 3-2 to Levante, and Leganes, who beat Athletic Bilbao 2-0.

Leganes are a point behind and play on Sunday at home to Real Madrid while Celta visit Espanyol.

Karim Benzema Zinedine Zidane Football
Get the latest updates on Fifa Worldcup 2022 and check out  Fifa World Cup Schedule, Stats and Live Cricket Score. Like us on Facebook or follow us on Twitter for more sports updates. You can also download the NDTV Cricket app for Android or iOS.