UEFA Champions League: Neymar's absence in the fixture vs Barcelona is a big blow for PSG, who are also without winger Angel Di Maria. 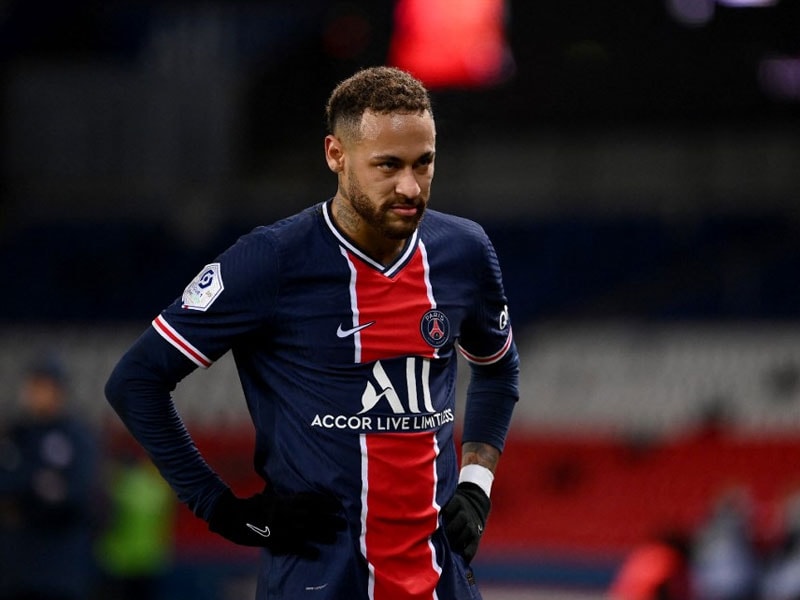 Neymar during a Ligue 1 fixture for Paris Saint-Germain.© AFP

Neymar will miss the first leg of Paris Saint-Germain's Champions League round of 16 tie against his former club Barcelona due to a groin injury, the French club said Thursday. The Brazil forward suffered the injury in PSG's 1-0 win against Caen in the last 64 of the French Cup on Wednesday, ruling him out of the game in Spain on February 16. "After analysis of clinical exams and scans, it is expected that he'll be out for around four weeks depending on the evolution of the injury," PSG said in a statement. The club are hopeful he could return for the second leg in France on March 10. "The sadness is great, the pain is immense and the crying is constant," Neymar wrote on Instagram.

"Once again, for a while, I will stop doing what I love most in life, which is playing football.

"Sometimes I feel uncomfortable because of my style of play, because I dribble and constantly get fouled, I don't know if the problem is me or what I do on the pitch."

Neymar also hit back at comments made by Caen coach Pascal Dupraz following the match, who accused him of "crying".

"Honestly it saddens me and I don't know how long I can take it, I just want to be happy playing football. THAT'S IT."

It is a second blow to last season's beaten Champions League finalists after winger Angel Di Maria was ruled out of the match with a thigh injury.

The eagerly-awaited last-16 matchup comes four years after Barca, helped by two goals from Neymar, bounced back from a 4-0 defeat by PSG in the first leg to thrash the French side 6-1 at the Camp Nou.

The 29-year-old has often struggled with injuries since leaving the Camp Nou for the French capital.

He missed key Champions League last-16 matches against Real Madrid in 2018 and Manchester United a year later, with PSG eliminated on both occasions.

Neymar has played 103 of PSG's 191 games since he signed, according to statisticians Opta.

He has already spent time out this season with a groin strain, an ankle injury and having tested positive for Covid-19.

Neymar, who has scored six goals in five group-stage appearances in the Champions League this term, walked off the pitch without waiting to be substituted following a tackle by Caen's Steeve Yago on Wednesday.

Coach Mauricio Pochettino, who will be relying on Kylian Mbappe, Moise Kean and Mauro Icardi to provide the goal threat against Barca, defended his decision to play Neymar midweek.

"Every game is important. I believe that PSG must win every game," said the Argentinian, who took over from the sacked Thomas Tuchel last month.

"If we had lost, you would have criticised me for not having given importance to the French Cup. We make the decisions, we analyse, we try to find the best team."

Angel Di Maria Football
Get the latest updates on ICC T20 Worldcup 2022, check out the Schedule and Live Score. Like us on Facebook or follow us on Twitter for more sports updates. You can also download the NDTV Cricket app for Android or iOS.