Willian scored twice and won a pair of penalties as Chelsea thrashed 10-man Qarabag 4-0 in Baku to guarantee Antonio Conte's side a top-two finish in Group C. 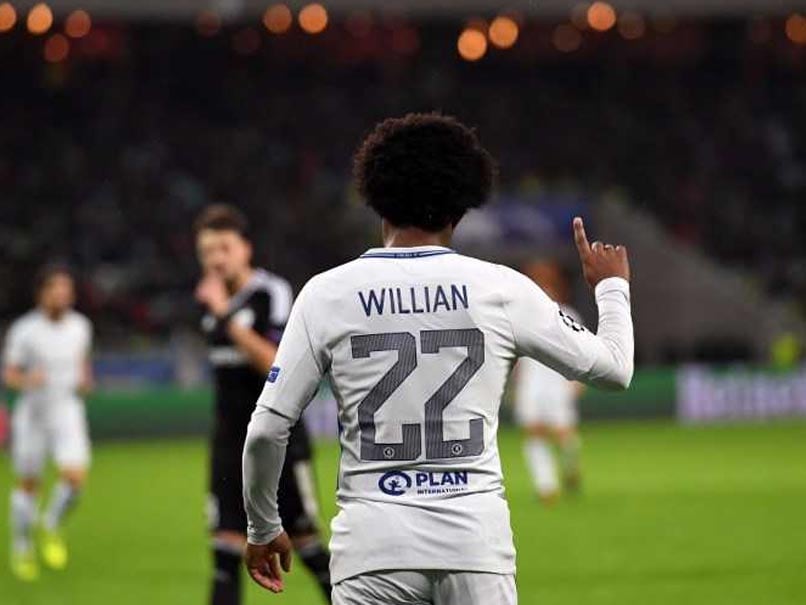 Barcelona and Chelsea progressed to the UEFA Champions League last 16 on Wednesday, but Jose Mourinho's Manchester United must wait to seal their spot after a last-gasp 0-1 defeat in Basel. Barcelona coach Ernesto Valverde rested Argentina star Lionel Messi in Turin, later introducing him as a second-half substitute as a 0-0 draw against Juventus sent the five-time European champions through as winners of Group D. Willian scored twice and won a pair of penalties as Chelsea thrashed 10-man Qarabag 4-0 in Baku to guarantee Antonio Conte's side a top-two finish in Group C.

First-half goals from Eden Hazard and Willian put Chelsea in control, with Cesc Fabregas adding a third before Willian netted again to cap the rout and knock Qarabag out of the competition.

"We did everything well. We should have scored more. It is easy to play with these good players," Hazard said.

Atletico Madrid, runners-up twice in the past four years, retained an outside chance of pipping Roma to a place in the knockout stage as Antoine Griezmann snapped an eight-match goal drought in a 2-0 win in Spain.

The French striker broke the deadlock with a spectacular acrobatic effort on 69 minutes, before compatriot Kevin Gameiro added a late second to seal a first win of the campaign for Atletico.

However, they must beat Chelsea at Stamford Bridge in their final game and hope Roma drop points at home to Qarabag to avoid parachuting into the Europa League.

United, who hit the woodwork twice in the first half through Marouane Fellaini and Marcos Rojo, looked on course to secure the point required to punch their ticket to the last 16 in Switzerland before Michael Lang popped up with an 89th-minute winner.

"It's like a dream. Right now I can't believe we won against such a strong team," Swiss international Lang told RTS.

"We always thought we could win this match and in the end it was a victory like I had never seen before."

Mourinho blamed United's inability to convert their first-half dominance into goals after watching his side lose their perfect record in the group.

"We lost because in the first half we should be 5-0 up but we could not score one goal after being so dominant," Mourinho said.

The result left United on 12 points, three ahead of both Basel and CSKA Moscow, and still almost certain of advancing, barring a huge defeat against the Russians at Old Trafford on December 5.

Russia goalkeeper Igor Akinfeev recorded a first clean sheet in the group stage since 2006 -- ending a staggering run of 43 matches conceding a goal -- as CSKA condemned Benfica to a fifth straight loss in Group A.

Georgi Schennikov's cool finish steered CSKA into a 13th-minute lead in Moscow before the hosts grabbed a second through an own goal from Brazilian defender Jardel.

Paris Saint-Germain dismantled Celtic 7-1 as the French giants registered their biggest win in the competition, despite falling behind when Moussa Dembele scored inside the first minute at the Parc des Princes.

A brace from Neymar soon turned the game around, before Edinson Cavani and Kylian Mbappe added goals of their own before the interval.

Marco Verratti made it five with quarter of an hour left, before Cavani got his second and a sensational Dani Alves hit wrapped up a record-breaking night as PSG shattered the previous mark of 21 group-stage goals set last year by Borussia Dortmund.

Unai Emery's team have now scored 24 times in five matches and conceded just once, although they must avoid a heavy reverse at Bayern Munich next month to ensure they finish top of Group B.

Robert Lewandowski and Corentin Tolisso scored in Brussels as Bayern overcame Anderlecht 2-1 to retain their 100 percent record since 72-year-old Jupp Heynckes returned for a fourth spell at the club.

Two goals from Dutch striker Bas Dost propelled Sporting to a 3-1 victory over Olympiakos, but the Portuguese outfit must beat Barcelona at the Camp Nou in their final fixture to have a chance of overhauling Juventus for a last-16 berth.

Comments
Topics mentioned in this article
Barcelona Chelsea Manchester United FC Basel Paris SG Willian Eden Hazard Football
Get the latest updates on ICC T20 Worldcup 2022, check out the Schedule and Live Score. Like us on Facebook or follow us on Twitter for more sports updates. You can also download the NDTV Cricket app for Android or iOS.