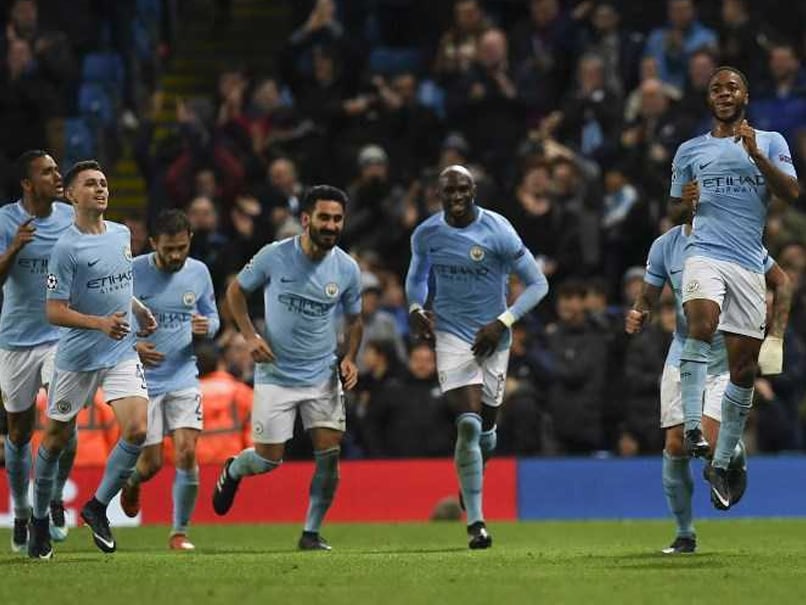 Pep Guardiola's Manchester City secured top spot in UEFA Champions League Group F after Raheem Sterling's late strike snatched a 1-0 win over Feyenoord on Tuesday. With City having already booked a place in the last 16, Guardiola made seven changes to his starting XI and he had to wait until the 88th minute for his side to make the breakthrough. Sterling's strike, after a one-two with Ilkay Gundogan, means City have now won their last 17 games in all competitions, including a victory on penalties over Wolverhampton Wanderers in the League Cup.

"Of course winning is better than not winning," said Guardiola.

"In the first half, we could do better. But sometimes it's difficult. You win a lot of games, you already qualify.

"But that is normal. In the end we scored a fantastic goal from Rash, excellent pass from Gundogan, and we were able to win."

Shakhtar Donetsk's defeat at Napoli meant City would have topped the group regardless of the result at the Etihad Stadium, but Sterling's goal maintained their 100 percent record in the competition.

The match also gave Guardiola an opportunity to hand a competitive debut to 17-year-old midfielder Phil Foden, star of England's recent triumph at the Under-17 World Cup, who came on as a late substitute.

Having failed to match Napoli's result, Dutch champions Feyenoord cannot now secure even the consolation of a Europa League berth.

Beaten coach Giovanni van Bronckhorst said: "To concede a goal in the 88th minute was a bit harsh.

"I think we deserved more today. I am very proud of how we performed and how we represented the club."

Though City controlled possession in the first half, the runaway Premier League leaders had trouble grinding out clear chances.

Sergio Aguero sent a tame shot straight at Feyenoord goalkeeper Brad Jones, who also produced an unconvincing parry to fend off a sighter from Sterling.

With Eliaquim Mangala deputising for the injured John Stones at the other end, City looked less secure at the back than in recent weeks and the visitors gave them a number of uncomfortable moments.

City goalkeeper Ederson atoned for a heavy touch with a last-ditch tackle on Jean-Paul Boethius and rushed out bravely to save from Tonny Vilhena, while Sam Larsson curled narrowly wide.

When City did get in behind Feyenoord, Sterling teeing up Bernardo Silva after a left-to-right dart along the edge of the box, the Portuguese could only prod a meek effort into Jones's gloves.

Kevin De Bruyne was booked on the hour for a clumsy trip on Steven Berghuis, ruling him out of City's trip to Donetsk on December 6.

The Belgium midfielder almost put City ahead with a daisy-cutter that skimmed past the left-hand post and both Yaya Toure and Aguero also went close as the second half wore on.

City's failure to make their territorial dominance count left them vulnerable and Berghuis nearly put Feyenoord ahead with a vicious shot that Ederson did well to tip over the bar.

Local youngster Foden, born in nearby Stockport, made his entrance in place of Toure with 15 minutes remaining and was roared onto the pitch.

With Feyenoord standing firm, it looked like he would have to wait for his first taste of victory in a City shirt.

But as full-time neared, Sterling laid the ball off to Gundogan and then scampered into the box to collect the German's return pass before cleverly checking to send Jones down and dinking the pall over him.

Comments
Topics mentioned in this article
Manchester City Feyenoord Shakhtar Donetsk Napoli Raheem Sterling Football
Get the latest updates on IPL 2021, check out the IPL 2021 Schedule and Indian Premier League Live Score . Like us on Facebook or follow us on Twitter for more sports updates. You can also download the NDTV Cricket app for Android or iOS.