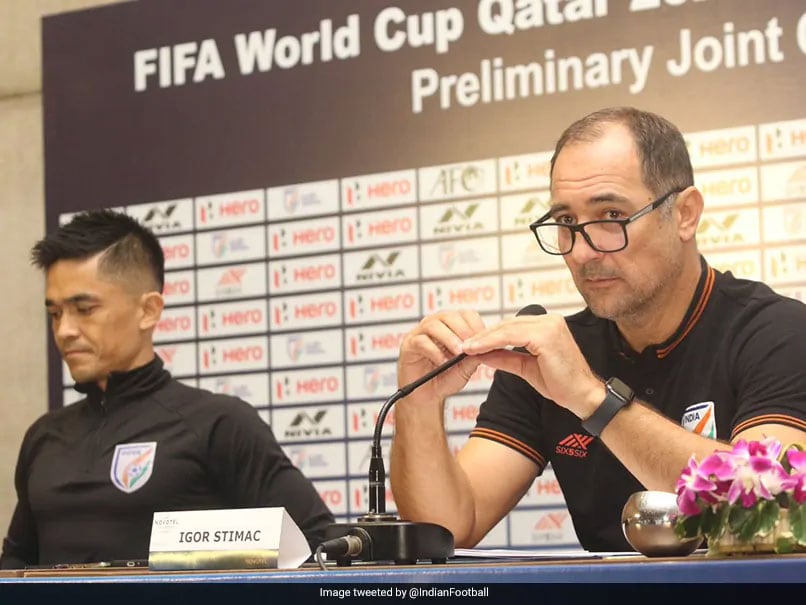 Igor Stimac said that Sunil Chhetri is "motivated enough to keep going" and is valuable to the team.© Twitter

Indian football head coach Igor Stimacfeels that talismanic captain Sunil Chhetriis motivated enough to keep going and remains "very valuable" for guiding the national team youngsters. During a recent interview, the 35-year-old Chhetri had said that he is fitter than ever and is not going away anytime soon, putting to rest speculations around his retirement.

Asked if Chhetri can play for another three-four years, Stimac told PTI: "He is motivated enough to keep going and very valuable to our youngsters with his attitude, professionalism and a positive mindset.

"We (coaches) are there to provide best possible service to all our players and do justice at the end by choosing the best 11 or 23 for a game. We are happy to have Sunil with us and we will help him stay focused and motivated on his game as long as possible," Stimac said from his home in Croatia.

He said the recent move of the All India Football Federation (AIFF) to reduce the number of foreign playersin the Indian Super League and I-League matches to four will benefit Indian football.

Stimac had earlier this year spoken on the need to reduce the number of foreign recruits in ISL and I-League.

"I am happy (with the move). It is going to bring benefits to Indian football very soon," said the 52-year-old who was a part of the bronze winning Croatian team in the 1998 World Cup.

Asked about the impact of introducing a lot of young players into the national team, he said, "From the very first day we started relying on young talented players believing that our hard work and trust in them will pay us back in the near future.

"I like when I see young players getting chances in Hero ISL and Hero I-league. That's our only way of speeding up and competing with other successful Asian football countries."

He said the Indian Arrows project was a clear example of good vision by the AIFF.

"Developing young players is mostly based and dependent on structured and professional work in football academies."

India Sunil Chhetri Football
Get the latest updates on India vs Australia and check out  Schedule, Results and Live Score. Like us on Facebook or follow us on Twitter for more sports updates. You can also download the NDTV Cricket app for Android or iOS.