Sunil Chhetri Says Will Talk About My Goals In 10 Years' Time, After Surpassing Lionel Messi In Scorers' List

India captain Sunil Chhetri brushed aside the talk of him surpassing Argentina great Lionel Messi in the list of international goal-scorers and said he will talk about his goals "10 years later". 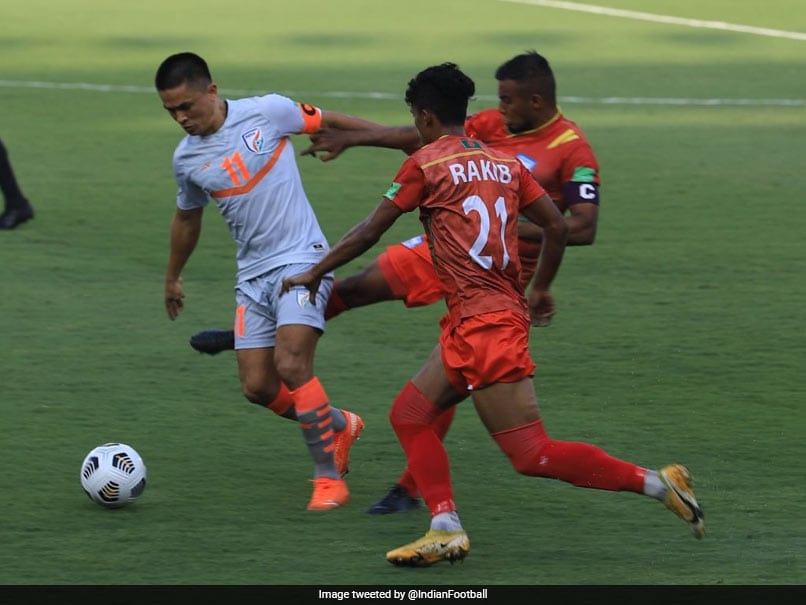 Sunil Chhetri has never liked counting his goals and he prefers to keep it that way even after surpassing the great Lionel Messi as the second highest scorer in international football. The 36-year-old Chhetri achieved his 74th strike with his brace against Bangladesh in the joint preliminary qualifying round match for 2022 FIFA World Cup and 2023 AFC Asian Cup here on Monday night. Messi has 73 so far. The skipper said he will get down to counting his goals probably 10 years down the line. "I do not count the number of goals. 10 years later, we will sit together, have a chat and then count," the veteran said.

The seasoned striker, who helped India register their first win in six years in World Cup qualifiers, now stands only behind Portugal's Cristiano Ronaldo (103) in the active international goal-scorers' list.
Instead of his goals, Chhetri focussed on the many lessons his team will take home from Monday's game.

"We will talk about it but I am happy that we got three points," Chhetri said.

On Monday, Chhetri broke the deadlock in the 79th minute when he headed in Ashique Kuruniyan's cross from the left, and then sealed the victory by curling in a shot from long range in added time.

When queries veered towards his goals again, Chhetri brushed them aside as a thing of past for him now.

"You know what. All of this is past. We play Afghanistan, and we have to be at our best. It will be a new day, a new canvas. And it is up to us to paint it the manner we want to," he asserted.

The India captain is just a goal away from entering world football's all-time top-10.

He is behind Hungary's Sandor Kocsis, Japan's Kunishige Kamamoto, and Kuwait's Bashar Abdullah, who all have 75 goals.

"Congratulations to @chetrisunil11 for overtaking Messi to become 2nd highest active international Goal-scorer! I enjoyed his brilliant 2 goals against Bangladesh which secured a win for India and put him on to 74 international goals," tweeted sports minister Kiren Rijiju on Tuesday.