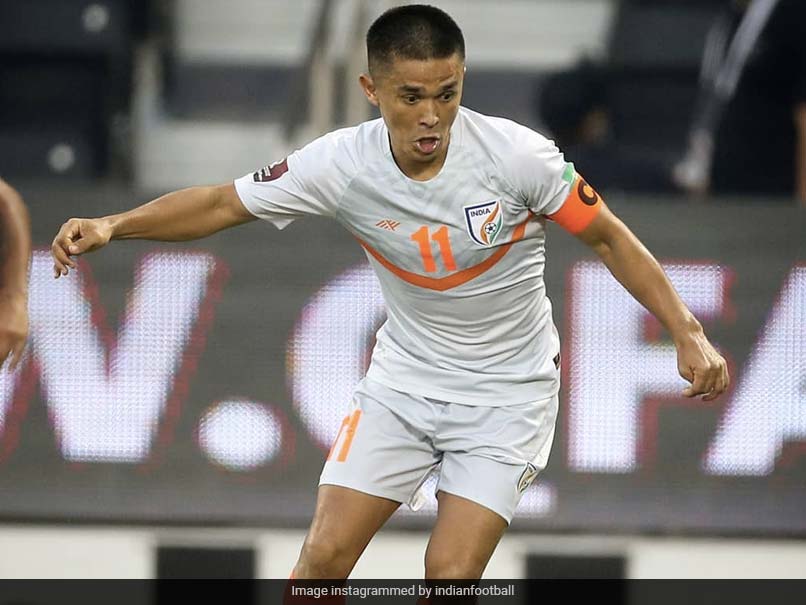 Talisman Sunil Chhetri handed India their first win in six years in FIFA World Cup qualifiers as his brace downed Bangladesh 2-0 in their preliminary round match in Doha on Monday. Chhetri broke the deadlock in the 79th minute when he headed in Ashique Kuruniyan's cross from the left. He then sealed the result by curling in a shot from long range in added time. Starting the match on the bench, second-half substitute Ashique delivered a cross from the left for Chhetri, who, after a bursting run and from an acute angle, headed in brilliantly from behind Topu Barman, at the Jassim Bin Hamad Stadium. It was that man Chhetri again as he rounded off his night with another fine strike in extra time (90+2) after receiving the ball from Suresh Singh from the right flank.

The double strikes meant India registered their first win in what was turning out to be one of their worst World Cup qualifying campaigns in many years.

India are already out of contention for a berth in next year's World Cup but remain in the reckoning for a place in the 2023 Asian Cup.

A confident India found themselves pressing in the opposition half after Chhetri's 73rd goal in international football and the move worked for beleaguered coach Igor Stimac as the captain scored his and the team's second just before the final whistle.

Despite being ahead, India looked to add to their tally with both Ashique and Chhetri linking up well, even as most of the Bangladesh players moved up in search of an equaliser.

In the end, the equaliser did not materialise but India surely ended on a high, giving their campaign the much-needed boost after a series of winless outings.

With his two goals, Chhetri, international football's second highest scorer among active players, more than made up for the fumble in the 63rd minute when the unmarked captain missed a free header after a fine ball from Brandon Fernandes.

Courtesy the result, India moved to six points from seven matches, while Bangladesh are at two points seven matches.

India next play Afghanistan in their last group league match on June 15. Stimac made three changes from the side that took on Qatar in the last match. The Blue Tigers made a cautious start, playing it among themselves while looking for gaps.

In the 2nd minute, Rakib Hossain was flashed the yellow for a tackle on Brandon Fernandes. India's first real chance came in the 15th minute when Brandon's through ball between the two central defenders found Manvir Singh in the clear inside the box.

With only the rival goalkeeper Anisur Rahaman to beat, Manvir failed to go for it quickly enough and allowed the rival defence to regroup in time. Bangladesh had a close shave in the 35th minute when Chinglensana Singh's header off a Brandon corner was cleared on the line by Riyadul Hasan.

Changing over, Mohammed Yasir came in for Udanta Singh, and Ashique replaced Bipin in the 46th minute.

On the hour mark, India brought in their third substitute, Liston Colaco coming in for Manvir. Almost immediately, rival captain Jamal Bhuyan was flashed the yellow after Suresh had sped past him on the right flank.

Off the resultant free-kick, Brandon did manage to find an unmarked Chhetri in the box but his header was off target.

Glan Martins' long-range effort won India a corner in the 73rd when it deflected off a rival defender over the goal-line. But India's agony continued as Subhashish Bose, all unmarked, failed to guide his header into the goal.

A minute later Asahique was shown the yellow card for a foul on Riyadul.

India finally broke the deadlock when the skipper connected with an Ashique cross from an acute angle to send the ball past Bangladesh goalkeeper Rahman.

Bangladesh began to throw bodies forward in search of the equaliser, but were often thwarted by the Indian defence