Lazio issued a statement condemning the behaviour of "a very small minority of fans". 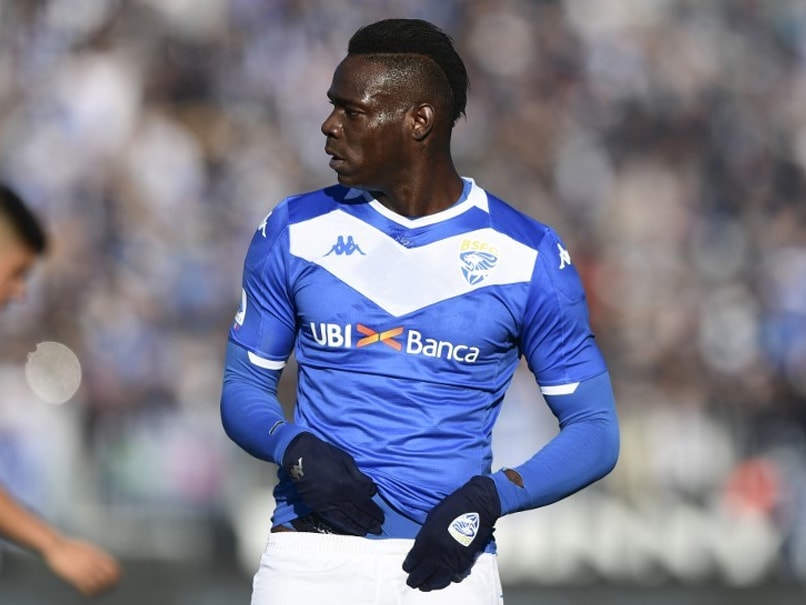 Mario Balotelli lashed out after again being targeted by racist insults, this time from Lazio fans.© AFP

Mario Balotelli lashed out on Sunday after again being targeted by racist insults, this time from Lazio fans after he scored for Brescia in a 2-1 Serie A defeat, telling his tormentors: "Shame on you". "A defeat that hurts but we will come back stronger and we are on the right track," the 29-year-old Italy international wrote on Instagram. "Lazio fans that were today at the stadium SHAME ON YOU! #saynotoracism." Balotelli struck the first goal after 18 minutes at Brescia's Stadio Mario Rigamonti before title-chasers Lazio hit back with a Ciro Immobile double.

But the game was overshadowed by insulting chants aimed at the former Manchester City and Liverpool player.

"It's already the second time," Balotelli told referee Gianluca Manganiello after half an hour, with the latter replying: "Now I'll take care of it".

Lazio coach Simone Inzaghi gestured in front of the visiting fans to stop the chanting, as an announcement was read over the stadium speakers reminding spectators play would be suspended and their club penalised if they continued.

Brescia fans tried to drown out the insults with whistles and cheering which Balotelli applauded.

Lazio later issued a statement condemning the behaviour of "a very small minority of fans".

"The club confirms once again that it condemns these unjustified excesses and it intends to prosecute those who betray their own sporting passion and cause serious damage to the image of the club and the Biancoceleste team," Lazio said.

In November, Balotelli threatened to walk off the pitch after being the target of monkey chants at Verona, with Inter Milan's Romelu Lukaku, AC Milan's Franck Kessie and Fiorentina's Dalbert also victims of abuse this season.

Balotelli picked up where he left off before the winter break pulling clear of Luiz Felipe to volley in his first home goal for Brescia and first of the decade.

He also scored the first goal of the previous decade in January 2010 with Inter Milan.

Immobile struck the winner after 91 minutes, having also converted from the penalty spot before the break.

Relegation-threatened Brescia were reduced to 10 men when Andrea Cistana was sent off for a second yellow card after bringing down Felipe Caicedo after 39 minutes.

Immobile brought his league tally to 19 goals connecting with a Caicedo cross to fire in the injury time winner.

The Swedish coach led Lazio to their last Serie A title in 2000.

"We absolutely want the Champions League," said Inzaghi, whose side beat Juventus to lift the Italian SuperCup trophy last month.

City rivals Roma, four points behind in fourth, lost ground with an Andrea Belotti brace giving Torino a 2-0 win in the Stadio Olimpico.

Belotti broke through just before the break and converted a penalty four minutes from time after Roma's Chris Smalling handled the ball.

Goalkeeper Salvatore Sirigu pulled off big saves as the ninth-placed northerners back winning.

Verona are just behind in tenth with Giampaolo Pazzini and Mariusz Stepinski scoring in either half in a 2-0 win over ten-man SPAL, who drop to bottom place after their 12th defeat this season.

New Genoa coach Davide Nicola got off to a winning start with a 2-1 victory over Sassuolo, the port side's first since October.

Inter Milan restart the title battle with Juve on Monday, with both sides level on 42 points after 17 games.

Antonio Conte's side travel to Napoli with the champions at home against Cagliari.

Italy Mario Balotelli Football
Get the latest updates on ICC T20 Worldcup 2022 and CWG 2022 check out the Schedule, Live Score and Medals Tally. Like us on Facebook or follow us on Twitter for more sports updates. You can also download the NDTV Cricket app for Android or iOS.