Robert Lewandowski, 'The Body' Who Put Lionel Messi And Cristiano Ronaldo In Shade

Robert Lewandowski has done what many thought impossible -- relegating superstars Cristiano Ronaldo and Lionel Messi to supporting roles at a football awards show. 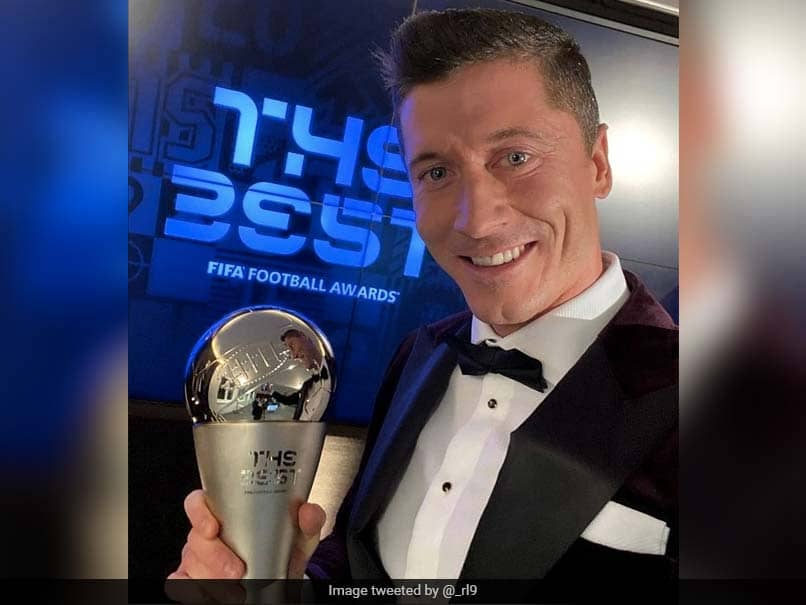 Nicknamed 'The Body' and dubbed a 'machine' by his wife, Robert Lewandowski has done what many thought impossible -- relegating superstars Cristiano Ronaldo and Lionel Messi to supporting roles at a football awards show. On Thursday, Bayern Munich's Polish striker claimed FIFA's 'The Best' prize for the year's top footballer, a season crowned by a European Champions League medal.

"He deserved it more than anyone else. He played the season of his life," said Bayern Munich chairman Karl-Heinz Rummenigge after Lewandowski's 55 goals in 2019/20 were a key factor in Bayern winning the treble.

The Poland forward has already scored 18 goals in 17 games this season, hitting the net twice against Wolfsburg on Wednesday to pass the milestone of 250 Bundesliga goals.

The fact Lewandowski has had to wait until he is 32 to be crowned at FIFA's 'The Best' awards is down to the way he proved himself in the knock-out stages of the Champions League last season.

Despite having been the Bundesliga's top-scorer for five of the last seven seasons, Lewandowski was getting a reputation for struggling to find the net in key Champions League games.

Up until February, he had failed to score in his previous seven matches in the knock-out stages.

His four goals for ex-club Dortmund in the 2013 semi-final, first-leg, against Real Madrid seemed a faded memory.

All that changed in February's last 16 win over Chelsea, when Lewandowski scored at Stamford Bridge, then set up Serge Gnarby's two goals in a 3-0 away win.

When the return leg was played nearly six month later, Lewandowski had a hand in all four goals -- scoring twice and creating two more -- in the 4-1 win at the Allianz Arena.

Lewandowski followed that up by scoring in the historic 8-2 quarter-final rout of Messi's Barcelona and netted again in the 3-0 semi-final win over Lyon.

He finished as the Champions League's top-scorer with 15 goals, two short of Ronaldo's record for a single season and was dubbed 'LewanGOALski' by Bayern team-mate Thomas Mueller.

His three goals in this season's group stages puts him level with Real Madrid legend Raul on 71 Champions League goals, short of Messi's 118 and Ronaldo, who has scored 134 times.

In October, Lewandowski was named UEFA's Player of the Year after Bayern added the UEFA Super Cup to their Bundesliga, German Cup and Champions League titles.

He could complete the set in February if Bayern win the Club World Cup in Qatar.

Lewandowski was spotted as a raw 21-year-old playing Polish league club for Lech Poznan, where he scored 41 goals in 82 games and joined Dortmund in 2010.

He made his breakthrough under Jurgen Klopp, helping Dortmund win back-to-back Bundesliga titles in 2010/11 and 2011/12.

He hit a hat-trick in the 5-2 drubbing of Bayern in the 2012 German Cup final, joining the Munich giants two years later having scored 103 goals in 187 games for Dortmund.

His goals on Wednesday mean Lewandowski has now scored 264 times in 306 games for the European champions.

Nicknamed 'The Body' by his team-mates, Lewandowski is known for his disciplined approach to nutrition and training, resulting in his honed physique.

"My husband is a machine," admits wife Anna, a former Polish karate international who serves as his personal trainer.

Lewandowski is rarely injured and former Bayern captain Oliver Kahn sees the striker as "an absolute model of professionalism, a condition for staying at the highest level for a very long time."

Cristiano Ronaldo Football FIFA
Get the latest updates on India vs England Series, India vs England , live score and IPL 2021 Auction . Like us on Facebook or follow us on Twitter for more sports updates. You can also download the NDTV Cricket app for Android or iOS.