The Best FIFA Football Awards: Robert Lewandowski, top scorer in Europe and winner of the Champions League with Bayern Munich, came out ahead of the other two nominees, Lionel Messi and Cristiano Ronaldo. 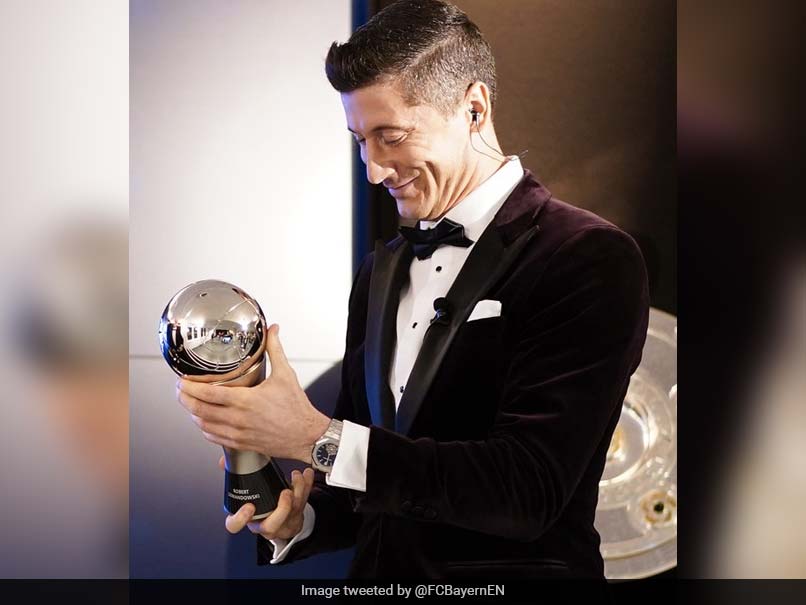 Robert Lewandowski was named men's player of the year by the FIFA.© Twitter

Bayern Munich striker Robert Lewandowskiwas named men's player of the year on Thursday at FIFA's 'The Best' awards ceremony in Zurich. The 32-year-old Lewandowski, top scorer in Europe and winner of the Champions League with Bayern, came out ahead of the other two nominees, Lionel Messi and Cristiano Ronaldo. England defender Lucy Bronze took the women's award, seeing off the challenge of Wendie Renard and Pernille Harder.

It is the first occasion for both Lewandowski and Bronze to win the award, with the Pole only the second player after Luka Modric in 2018 to break a 13-year Messi-Ronaldo hegemony.

"I am very proud and very happy," said Lewandowski.

"I have to honestly say that it is a great day for me and for my club.

"It is an unbelievable feeling. Winning an award ahead of Lionel Messi and Cristiano Ronaldo means a lot to me."

Lewandowski's stellar season for all-conquering Bayern has already been recognised by UEFA who awarded the Polish striker European player of the year in October.

While he has won the Bundesliga in each of his first six seasons at Bayern, finishing as the league's top scorer in four of the last five seasons, his international profile has been hurt in the past by Poland's mediocre form and his previous failure, at Dortmund and Bayern, to win the Champions League.

Last season, however, he was spectacular as Bayern won every game in Europe including the Champions League final against Paris St-Germain.

Lewandowski finished with 15 goals in the competition, five more than the next best striker, Erling Braut Haaland.

"It has not been an easy year, as it has been for the whole world, but we won everything we could win," said the Pole.

"The highlight was the victory in the Champions League final against PSG, it was a special day."

His Bayern teammate Manuel Neuer was chosen as 'The Best' FIFA men's goalkeeper.

Bronze, 29, who succeeds last year's winner Megan Rapinoe, won the Champions League with Lyon in August before moving back to England to play for Manchester City.

She was a suprise winner ahead of her former Lyon teammate Renard, and striker Harder, who moved from Wolfsburg to Chelsea in early September.

"What a surprise, to even be nominated alongside the two other players, they are both incredible players and outstanding human beings well," said Bronze during the ceremony.

"I don't think I have the words right now to explain how I am feeling. If there is anything 2020 has taught us it is to appreciate every moment you have, never look too far ahead and live in the here and now.

"I will appreciate winning this award now more than ever and I will remember this moment for the rest of my life."

The Puskas Award for best goal went to Tottenham's South Korean striker Son Heung-min for a mazy, individual goal he scored against Burnley in the Premier League in December 2019.

The Best awards began in 2017 after a brief merger with the Ballon D'Or, which was cancelled this year because of coronavirus, and the FIFA Player of the Year award, which was created in 1991.

Robert Lewandowski
Get the latest updates on SA vs IND 2021-22, check out the Schedule and Live Score . Like us on Facebook or follow us on Twitter for more sports updates. You can also download the NDTV Cricket app for Android or iOS.