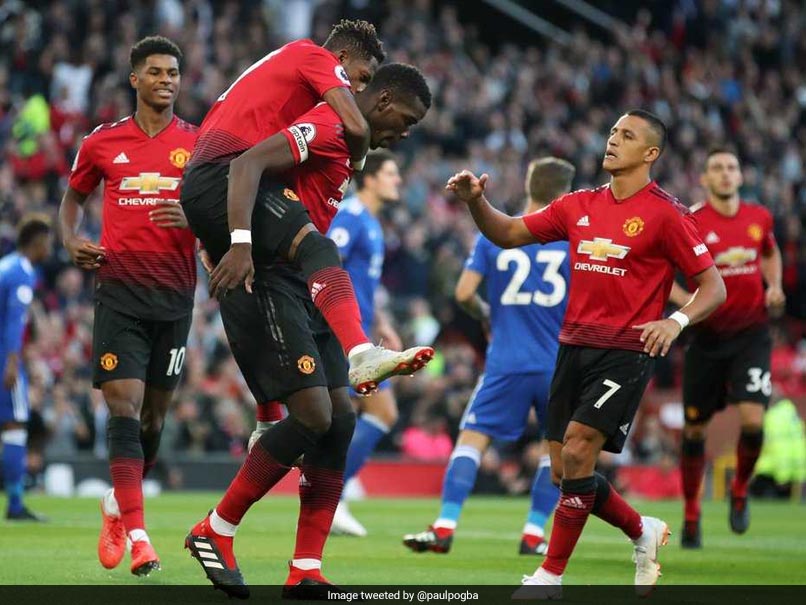 Paul Pogba was given the captaincy by Mourinho on Friday© Twitter

Paul Pogba added fuel to rumours of his deteriorating relationship with Manchester United manager Jose Mourinho, saying he could not express himself for fear of being fined. The 25-year-old -- who scored a superb goal in France's 4-2 victory over Croatia in the World Cup final -- was credited with a 'monster performance' by Mourinho in United's opening 2-1 Premier League win over Leicester City on Friday. However, Pogba -- who cost United a then-world record 89 million pounds (105 million euros, 116 million dollars) in 2016 to prise him away from Juventus -- is known to be upset by Mourinho's remarks about his performances at the World Cup compared to those for his club last season. Mourinho had impliedPogba -- whose agent Mini Raiola has reportedly been talking with Barcelona -- had flourished under Didier Deschamps at the World Cup because he could not be distracted by his entourage or by his commercial obligations.

"There are things and there are things that I cannot say otherwise I will get fined," Pogba told the British press after the Leicester match in a rare occasion he has stopped to speak with them.

Pogba, who was given the captaincy by Mourinho on Friday, summed up what it meant for him to be happy and comfortable.

"If you're not happy, you cannot give your best," said Pogba.

"You have to know one thing: a player that gets chosen and is happy, you always feel more comfortable than when he's not happy. That's all I say."

Pogba, who was dropped by Mourinho for both legs of the Champions League last-16 loss to Sevilla last term, said there were differences between playing for France and United.

"I am the same, but it's a different team, obviously," said Pogba.

"I still enjoying playing football but like I said, when you are comfortable or confident and are good in the head, it's going to be easier."

Pogba said "everybody was on the same page" in the France dressing room, from Deschamps to the staff and players -- that has not necessarily been the case at United with several players at different times singled out for public criticism by Mourinho.

"When you have everybody with you, everybody next to you, you know they want to fight for you, obviously it's going to be easier," he said.

However, Pogba -- who could still leave despite last Thursday's English transfer deadline day as most European leagues keep their transfer windows open until the end of August -- professed his deep love for the club.

"I always love the club (United). I came from the academy, I played for the first team. For me, it was a dream come true."

Paul Pogba English Premier League Football
Get the latest updates on India vs South Africa and check out  Schedule, Results and Live Score. Like us on Facebook or follow us on Twitter for more sports updates. You can also download the NDTV Cricket app for Android or iOS.