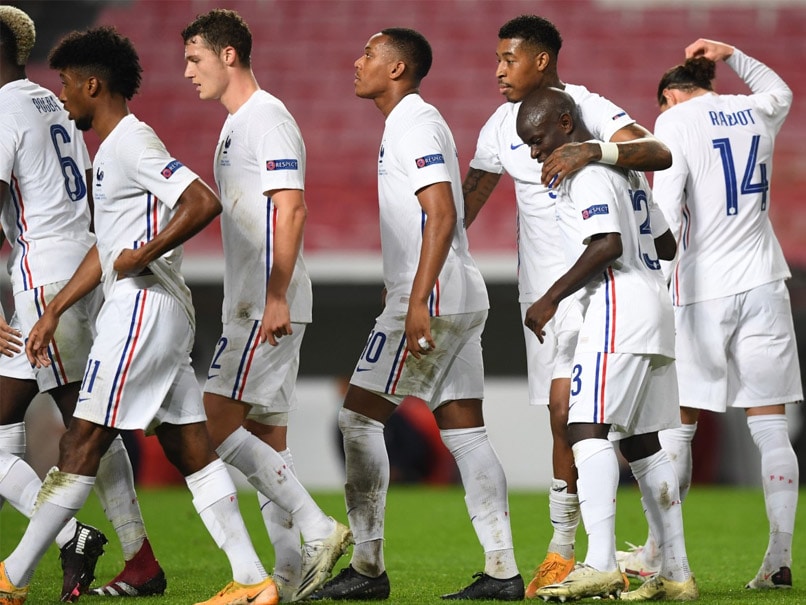 N'Golo Kante scored just his second international goal as World Cup holders Francedefeated European champions Portugal1-0 in Lisbon on Saturday to secure a place in the Nations Leaguefinals. Chelsea midfielder Kante was quickest to react to a rebound as he netted the winner on 53 minutes that clinched France top spot in Group 3 ahead of the final round of matches.

France lead Portugal by three points ahead of Tuesday's clash with Sweden in Paris but are guaranteed first place by virtue of their superior head-to-head record.

Didier Deschamps' side became the first team to advance to the finals, which UEFA has pencilled in for October next year. Portugal won the inaugural edition on home soil in 2019.

"It's very nice to see them snatch the win. It's deserved. We've fulfilled our objective of finishing first," Deschamps told French broadcaster TF1.

"I'm very proud of the players, it's a very difficult time. Some aren't in the best situations at their club but when they get together there is this competitive spirit.

He added: "I'm very happy for them because they have proved their team spirit and that they're competitors."

With victory for either country enough to win the group, Deschamps made two changes to the team that drew 0-0 with Portugal at the Stade de France last month.

Kingsley Coman replaced the injured Kylian Mbappein attack as Anthony Martial was preferred to Olivier Giroud, France's all-time second leading scorer. Paul Pogba was the only starter to begin the 2-0 friendly loss to Finland in midweek.

Jose Fonte replaced the vastly experienced Pepe, sidelined by a foot problem, in a Portugal defence that had not conceded a goal in five matches.

Coman forced Rui Patricio to tip over a firm strike as France made a bright start at the Estadio da Luz, with Martial denied by the legs of the Portugal goalkeeper after a neat ball through from Antoine Griezmann.

Martial's only previous goal for France came four years ago, but the Manchester United striker was a constant threat against a Portugal side unbeaten in 21 matches at home.

Adrien Rabiot nodded wide from a corner and then inadvertently set up Martial at a free-kick when a header from the latter smacked against the crossbar.

Martial lunged to reach a dangerous Lucas Hernandez cross but was thwarted by a terrific Patricio block before Cristiano Ronaldo powered a header narrowly over on the stroke of half-time.

An inspired Patricio kept France at bay until he was unable to properly deal with Rabiot's low angled strike early in the second half, pushing it straight to Kante who forced home from inside the six-yard box.

Pogba fluffed a header from a pinpoint Rabiot delivery as France sought a second and Martial was again frustrated by Patricio as he flicked the ball towards goal from a Hernandez pass.

Portugal nearly levelled when Hugo Lloris could only parry a speculative attempt from Raphael Guerreiro, Fonte heading against the post as the hosts kept the attack alive.

The France captain then produced an excellent stop to keep out a long-range effort from Joao Moutinho as the visitors successfully absorbed late pressure to punch their ticket to next year's finals.

Portugal Football
Get the latest updates on ICC Women's Cricket World Cup 2022 and IPL 2022, check out the Schedule , Live Score and IPL Points Table. Like us on Facebook or follow us on Twitter for more sports updates. You can also download the NDTV Cricket app for Android or iOS.