There were loud cheers from the 41,000-strong Shenzhen crowd when Neymar was introduced on 76 minutes. 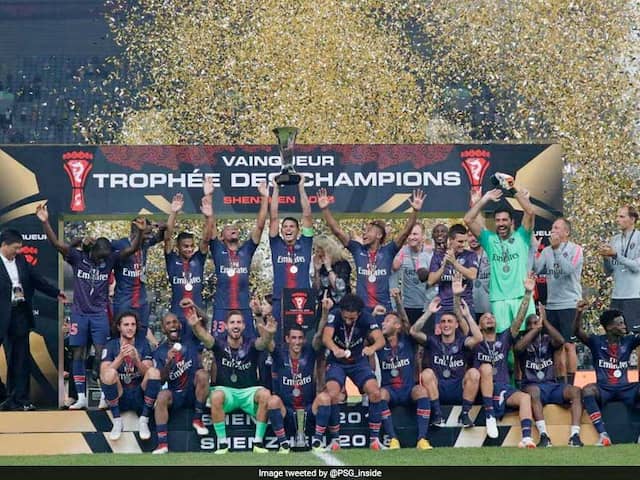 Brazilian superstar Neymar made his first club appearance since February as Paris Saint-Germain thrashed Monaco 4-0 in the Champions Trophy in China on Saturday. Angel Di Maria's double fired PSG to their first silverware under new coach Thomas Tuchel as Neymar, long sidelined by a metatarsal fracture, came on as a late substitute. Di Maria's thunderous free kick opened the scoring on 33 minutes and he grabbed PSG's fourth in injury time following strikes from Christopher Nkunku and Tim Weah. It was a comprehensive win for the reigning French champions in the season's curtain-raiser, even without Kylian Mbappe and Edinson Cavani who are yet to return after the World Cup.

PSG, with their names in Chinese characters on the back of their shirts, were the aggressors and they took the lead via Di Maria's sumptuous free kick on 33 minutes.

The Argentina forward swept over the wall and into the top right corner from 25 metres, evading Diego Benaglio's despairing dive.

As Tuchel watched while sitting on an ice box in the technical area, Nkunku made it 2-0 on 40 minutes with a close-range finish from Stanley Nsoki's inviting cross.

Weah went close and Di Maria then left Benaglio nursing sore fingers with a powerful drive near the break as the French champions went into half-time firmly in control.

Weah put the win beyond doubt in the 67th minute when he stroked home Nsoki's lay-back, before Nkunku rattled the crossbar from close range shortly afterwards.

There were loud cheers from the 41,000-strong Shenzhen crowd when Neymar was introduced on 76 minutes but the world's most expensive player, last seen in Brazil's World Cup quarter-final loss to Belgium, couldn't add to the scoresheet.

Di Maria, deservedly, had the last word when Adrien Rabiot's long run set him up for an easy finish which he slotted past the beleaguered Benaglio in the third added minute.

Angel Di Maria
Get the latest Cricket news, check out the India cricket schedule, Cricket live score . Like us on Facebook or follow us on Twitter for more sports updates. You can also download the NDTV Cricket app for Android or iOS.