Neymar, wearing a canary-yellow hoodie, posed for pictures with airport staff before his noisy welcome in the arrivals hall. 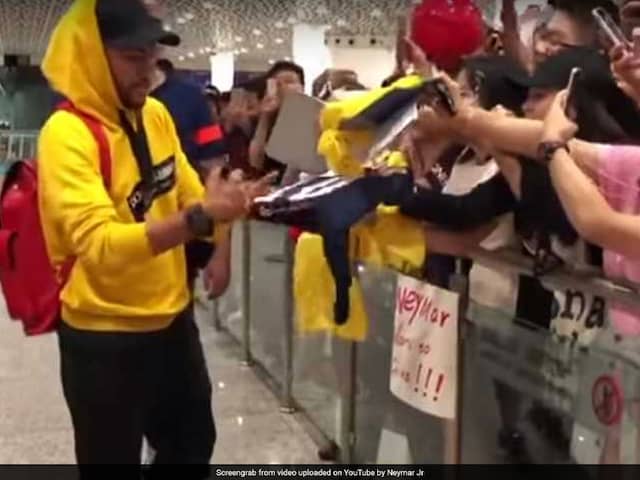 Dozens of screaming fans welcomed Brazil star Neymar on Thursday as he flew in to China to join his Paris Saint-Germain teammates after his disappointing FIFA World Cup 2018 in Russia. The world's most expensive player, wearing a canary-yellow hoodie, posed for pictures with airport staff before his noisy welcome in the arrivals hall. Footage on Neymar's Twitter account showed him signing Barcelona, Brazil and PSG shirts before being guided through the crowd by minders and security staff.

Neymar's arrival, ahead of Saturday's French Super Cup game against Monaco in Shenzhen, comes more than five months after his last appearance for PSG following a foot injury in late February.

The flamboyant forward then endured a turbulent World Cup as Brazil were stunned by Belgium in the quarter-finals and he was widely lampooned for his play-acting.

"I didn't want to see a ball, or to see any more football played," the 26-year-old told AFP last month in an interview, describing his World Cup disappointment.

However, Thursday's enthusiastic welcome indicated that his popularity in China remains very much intact.

Barcelona Neymar Football
Get the latest Cricket news, check out the India cricket schedule, Cricket live score . Like us on Facebook or follow us on Twitter for more sports updates. You can also download the NDTV Cricket app for Android or iOS.