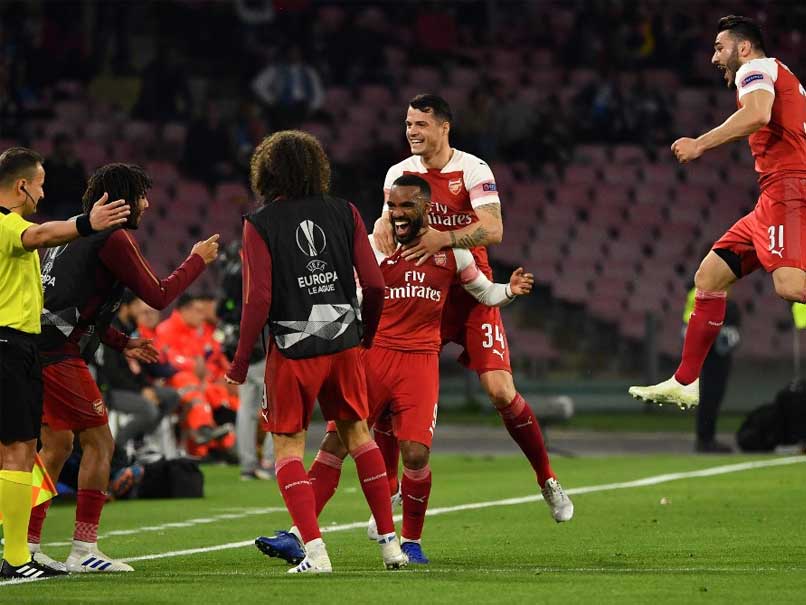 Alexandre Lacazette scored the only goal as Arsenal dispatched Napoli 1-0 on Thursday to advance to the Europa League semi-finals 3-0 on aggregate. Lacazette's stunning 36th-minute free-kick put the English club through to a final four meeting with Spanish side Valencia. "I dont know if it's our best performance this season, but it's good, particularly after beating Watford Monday," said Arsenal coach Unai Emery. "Our objective was to score, we did that, to win, and to be consistent for 90 minutes. "I'm very proud of the players, very proud of our work. The players showed personality."

The exit of Carlo Ancelotti's Napoli means no Italian clubs are left in European competition this season.

"We knew it was going to be difficult, and sorry there's no Italian teams left," said Ancelotti, after Juventus crashed out of the Champions League to Ajax on Tuesday.

"I think the key to qualification was the first 20 minutes in the away match, that's when we played really badly.

"The two games were really balanced, there wasn't that much of a difference as the result suggests."

Emery's side were never troubled by the Italians despite the heated atmosphere in the Stadio San Paolo, with just over a thousand English fans among the 40,000 crowd, and after losing midfielder Aaron Ramsey to a hamstring injury after half an hour.

Napoli had turned up the pressure early with a chance to break through after 17 minutes with Kalidou Koulibaly going on the counter-attack, racing up the pitch to cross to Jose Callejon but Petr Cech closed down the Spaniard's weak effort.

Ramsey limped off after 33 minutes with Henrikh Mkhitaryan coming on for the Welsh international.

The Armenian promptly set up Lacazette who was awarded a free-kick after being brought down by Piotr Zielinski.

Lacazette whipped the ball in from 25 metres past a motionless Alex Meret in the Napoli goal.

Napoli could have scored four goals but paid for sloppy finishing, with captain Lorenzo Insigne visibly upset as the team were whistled off the pitch.

"I think Arsenal is an intelligent team, they are really well organised offensively and defensively," said Ancelotti.

"It's not a team that plays in my opinion fantastic football, but they play intelligently and they deserved victory. I wish them the best in the Europa League."

Napoli's hopes of a first Serie A title since 1990 are over as they trail second in Serie A -- 17 points behind Juventus who need just one point to wrap up an eighth consecutive Scudetto.

They have not won a European title since the days of Diego Maradona back in 1989.

"We're all very disappointed but the heart was there for all 90 minutes, we tried.

"In the first half we played in an intelligent way until the Arsenal goal, we also had a couple of occasions to score a goal, in these games it's important that things go your way.

"We tried, but we look forward, there's not going to be any drama, everyone is united to try and bring what we achieved this season forward.

"The future is already a work in progress, we want to secure the second spot (in the league) as soon as possible."

Alexandre Lacazette Football
Get the latest updates on IPL Auction 2023 and check out  IPL 2023 and Live Cricket Score. Like us on Facebook or follow us on Twitter for more sports updates. You can also download the NDTV Cricket app for Android or iOS.