Chelsea will face Eintracht Frankfurt for a place in the Europa League final after the German side beat Benfica 2-0 on Thursday to go through on away goals. 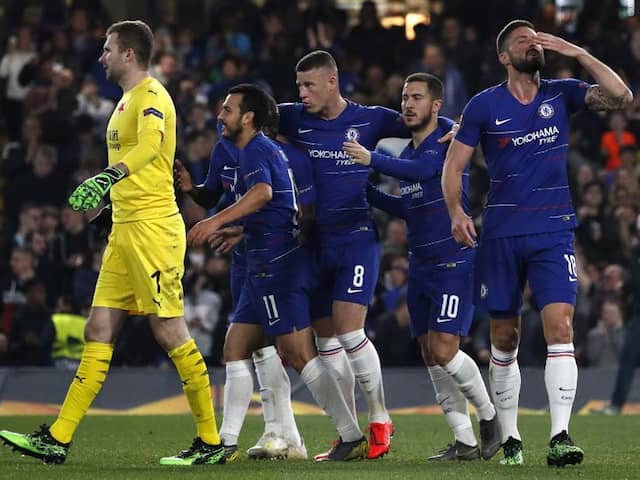 Chelsea were given a fright by Slavia Prague in a 4-3 home win on Thursday that saw them to a 5-3 aggregate victory and a place in the semi-finals of the Europa League. Already 1-0 up from the first leg, Chelsea were cruising when they scored three more goals in the first 17 minutes at Stamford Bridge courtesy of Pedro, an own-goal by Simon Deli and Olivier Giroud and were 4-1 ahead on the night at half-time. But facing a rout, the Czech visitors restored their pride with two early second-half goals from Petr Sevcik as they threatened a remarkable comeback.

Chelsea, however, held on and the London club will face Eintracht Frankfurt for a place in the final after the German side beat Benfica 2-0 to go through on away goals after that tie ended level at 4-4 after two legs.

Relieved Chelsea manager Maurizio Sarri told BT Sport: "We started very badly in the second half but I'm really really happy because we played well in the first 45 minutes and we are in a European semi-final which is very important to us.

"We knew very well the match was going to be difficult. They ran a lot and with quality -- lot of metres at high speed."

Giroud, meanwhile, was proud of Chelsea's resilience after their stumble, with the 2018 World Cup-winning France forward adding: "4-1 at half time obviously maybe in an unconscious way we dropped the intensity down a little bit and even some technical mistakes but this team never give up, I said it before the game."

Sarri made five changes from the team beaten 2-0 by Liverpool in the Premier League on Sunday and put Eden Hazard on the wing with Giroud the Blues' central striker.

The Londoners doubled their aggregate lead just five minutes into the second leg of this quarter-final tie thanks to Pedro's neat finish after a one-two with Giroud.

Minutes later, Chelsea had another goal.

Pedro produced a contender for miss of the season when presented with a tap-in from close range that came back off the post only for the ball to fly into the face of Slavia defender Deli and rebound into the net for a bizarre own-goal.

Pedro then turned provider, squaring for Giroud to score his 10th Europa League goal of the season.

Chelsea were cruising at 3-0 ahead on aggregate and it seemed Tomas Soucek had done no more than score a consolation goal when he rose unmarked to head in from a corner.

Chelsea though were soon three goals ahead again when Pedro bundled the ball in.

But Slavia rallied impressively after the interval, with Sevcik's 20-yard shot beating Kepa Arrizabalaga at the Chelsea goalkeeper's near post.

And soon afterwards, in the 55th minute, Sevcik produced an even better effort from similar range that flew into the top corner as Slavia's fightback continued.

But that was as good as it got for the visitors, with Sevcik scuffing a shot that might have seen him complete what would have been an astonishing hat-trick.

Olivier Giroud Eden Hazard Football
Get the latest Cricket news, check out the India cricket schedule, Cricket live score . Like us on Facebook or follow us on Twitter for more sports updates. You can also download the NDTV Cricket app for Android or iOS.