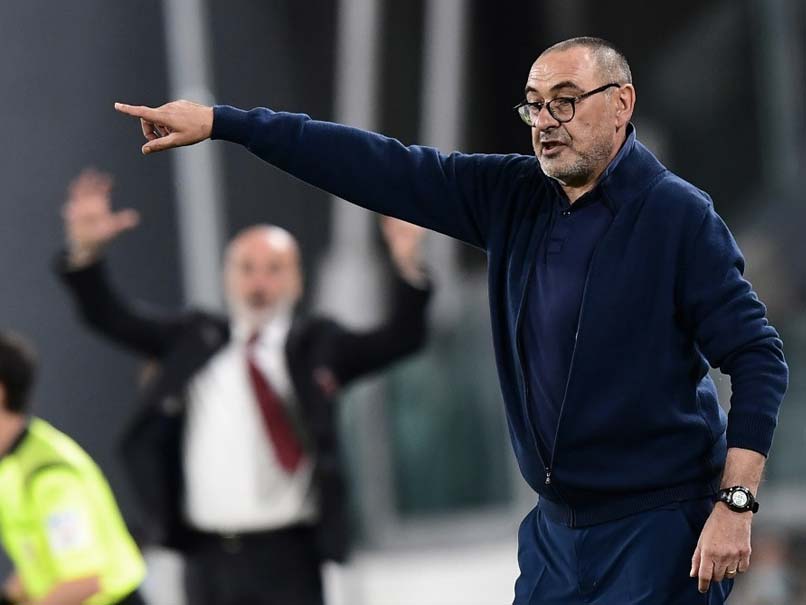 Maurizio Sarri took over at Juventus one year ago after a season with Chelsea.© AFP

Maurizio Sarri takes on his former club Napoli in Wednesday's Italian Cup final looking for his first trophy as Juventus coach days before Serie A resumes after a three-month shutdown. Juventus are chasing a record-extending 14th Italian Cup against five-time winners Napoli in Rome, after the Turin giants' four-year cup-winning streak was ended last season. Sarri took over at Juventus one year ago after a season with Chelsea during which the Premier League side won the Europa League.

Before that the 61-year-old spent three seasons with Napoli, battling Juventus for the title, before falling out with club owner Aurelio De Laurentiis.

Sarri claimed he only found out he had been sacked and replaced by Carlo Ancelotti when he switched on the television.

"He (Sarri) betrayed me, he left with the vulgar excuse of money, forced me to change, and still had a two-year contract," De Laurentiis told Corriere dello Sport.

But the former Chelsea manager will have another chance for just the second trophy of his 30-year coaching career at an empty Stadio Olimpico.

A win would help the eight-time defending Serie A champions set the tone when the title battle resumes next week, with Lazio just one point behind in second place.

Juventus striker Gonzalo Higuain, who helped Napoli to their last Italian Cup triumph in 2014 and was Serie A's top-scorer with 36 goals under Sarri in the 2015–2016 season, remains a doubt for the Turin side with a thigh injury.

Cristiano Ronaldo, who missed a penalty in Friday's semi-final second leg against AC Milan, will start up front for Juventus, while Napoli winger Dries Mertens is fresh from breaking the club's all-time scoring record with a last-four goal against Inter Milan.

Ronaldo, who has scored 25 goals this season, can lift a 30th career trophy in Rome.

"It will take a little patience.

"The players have been on their sofas for weeks, and so getting them back to complete physical and mental efficiency is not simple or automatic."

Napoli are sixth in Serie A, and chasing their first trophy since 2014, after a difficult start to the season with Gennaro Gattuso replacing Ancelotti in December.

The last time the two teams met in a final was the Italian Super Cup in December 2014, with Napoli coming out on top.

Napoli and Juventus last met in an Italian Cup final eight years ago, with the southerners winning 2-0 at the Stadio Olimpico for their first major trophy in 22 years.

Napoli Football
Get the latest updates on T20 World Cup, check out the T20 World Cup Schedule and Live Score . Like us on Facebook or follow us on Twitter for more sports updates. You can also download the NDTV Cricket app for Android or iOS.