Pep Guardiola's side took the lead when Kevin De Bruyne marked his return from injury with a fine finish in the first half at the King Power Stadium. 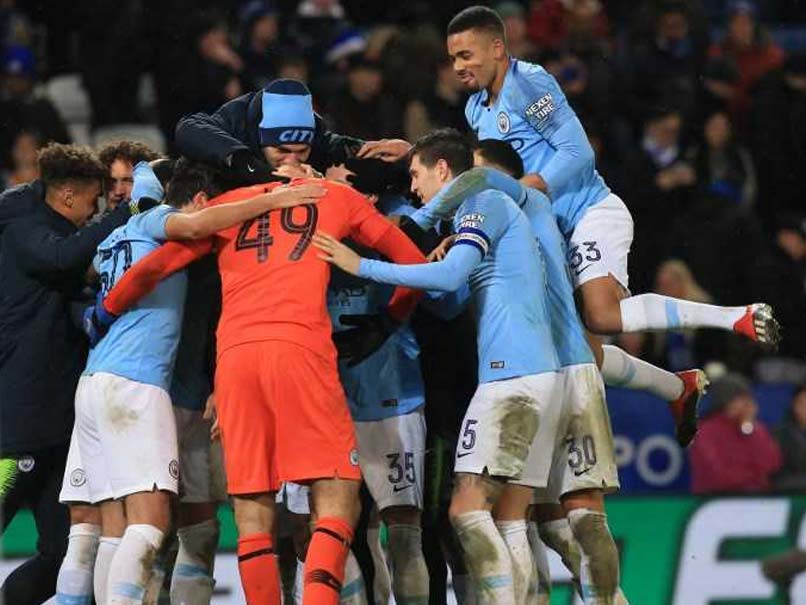 Manchester City had beaten Leicester on penalties at the same stage of the League Cup last season.© AFP

Manchester City survived a penalty shoot-out to reach the League Cup semi-finals as young keeper Arijanit Muric starred in the dramatic finale to the holders' win over Leicester on Tuesday. Pep Guardiola's side took the lead when Kevin De Bruyne marked his return from injury with a fine finish in the first half at the King Power Stadium. Marc Albrighton cancelled out De Bruyne's first goal since April with a late equaliser to set up the 3-1 shoot-out win.

Muric, making his second City appearance in place of the rested Ederson, stole the spotlight as the 20-year-old Kosovo international made two penalty saves to clinch his team's last four berth.

Just hours after Guardiola's old rival Jose Mourinho was sacked by Manchester United after their worst start for 28 years, City could afford to make eight changes and still went through as they chase the third trophy of the Guardiola era.

"A tough game, it is always difficult at Leicester. We played with a guy (Eric Garcia) who is 17 years old and some injured players, but it was a good game," Guardiola said.

De Bruyne added: "I feel stiff but I am happy to contribute. To be out for so long and to play 70 minutes is a good sign for me.

"We want to win titles so there's two games more and we can battle for another trophy."

City had 87 percent of the possession in the early stages and their pressure was rewarded in the 14th minute.

De Bruyne took control on the left edge of the Leicester area, cleverly shifted the ball onto his right foot before unleashing a low drive that zipped through the legs of Hamza Choudhury and past goalkeeper Danny Ward.

It was a cathartic moment for De Bruyne in only his seventh appearance of a frustrating season ravaged by two knee injuries.

The Belgium midfielder was making his first start since being injured in City's League Cup win over Fulham on November 1.

Riyad Mahrez was making his first return to Leicester following his move to City in the close-season.

The Algeria winger almost doubled City's lead when he pounced on Brahim Diaz's shot and smashed a volley just over.

Muric kept his side's lead intact when he sprawled to the left to repel a long-range drive from Demarai Gray that appeared destined for the bottom corner.

Sergio Aguero, back from an injury that sidelined him for three weeks, should have put City two up moments after half-time.

However, the Argentine forward shot too close to Ward after running onto Mahrez's pass.

Leicester drew level in the 73rd minute when Wilfred Ndidi lofted a pass that picked out Albrighton's run behind Oleksandr Zinchenko and the substitute slammed a fierce strike into the far corner.

Guardiola's men had beaten Leicester on penalties at the same stage of the League Cup last season.

Leicester had more recent spot-kick success after beating Wolves and Southampton on penalties in the previous two rounds, but it was City who prevailed again.

Leicester's Christian Fuchs and City's Raheem Sterling both shot over.

Muric seized the moment with saves to deny James Maddison and Caglar Soyuncu before Zinchenko drilled in the winner.

Third tier Burton are into the semi-final for the first time in their history after a shock 1-0 win at Championship promotion chasers Middlesbrough.

Sixth in the second tier, Middlesbrough made a host of changes and were punished by their lowly opponents.

Burton, 15th in League One, are the first team from the third tier or lower to reach the semi-finals since Sheffield United in 2014-15.

Jake Hesketh put Nigel Clough's side into the lead in the 48th minute, the on-loan Southampton midfielder firing home from the edge of the area.

Clough won the League Cup twice as a player with Nottingham Forest in 1989 and 1990.

Leicester City Football
Get the latest updates on ICC T20 Worldcup 2022 and CWG 2022 check out the Schedule, Live Score and Medals Tally. Like us on Facebook or follow us on Twitter for more sports updates. You can also download the NDTV Cricket app for Android or iOS.