The win over Everton, moved Manchester City two points ahead of Liverpool, who host Manchester United on Sunday. 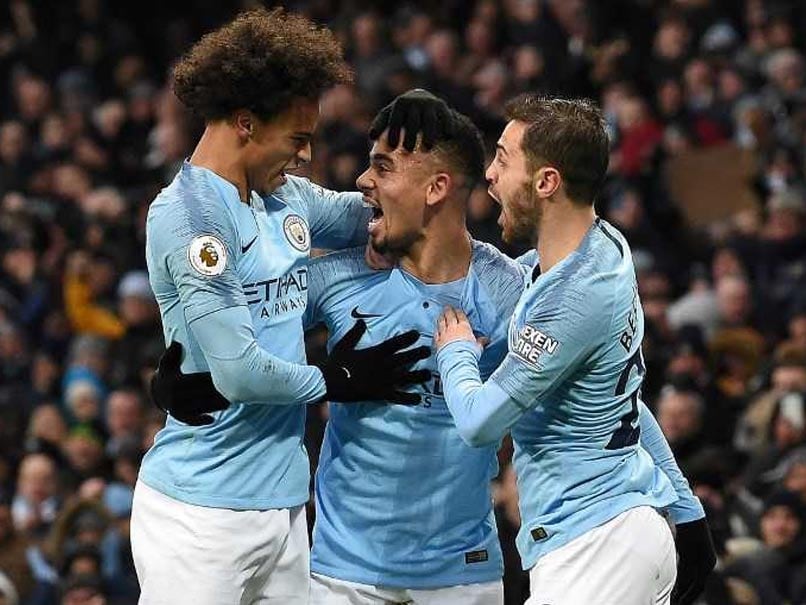 Pep Guardiola welcomed Gabriel Jesus' return to form as the Brazilian struck twice in a 3-1 win over Everton as Manchester City leapfrogged Liverpool back to the top of the Premier League. Jesus hadn't scored a Premier League goal for four months before opening the scoring midway through the first-half and bulleted home a header to double City's lead early in the second-half. Dominic Calvert-Lewin briefly gave Everton hope, but Raheem Sterling came off the bench to make the game safe with his first touch and move City two points ahead of Liverpool, who host Manchester United on Sunday.

"Strikers need to score goals," said Guardiola of Jesus's man-of-the-match performance. "The difference today was that he scored as he was in better positions."

Guardiola could even afford the luxury of leaving Kevin de Bruyne and Sergio Aguero on the bench on their return from injury as the Catalan coach again shuffled his pack for the busy festive period.

But fears in recent weeks that City lack a predator in front of goal when Aguero is absent were quashed by two fine finishes from Jesus.

"My confidence is back because my family is here and it helps me a lot. I needed my family in this moment," said the Brazilian international.

"This year it (the title) will be more difficult because the (other) clubs will play better. I think it is very important we have come back to first position."

With temperatures approaching freezing in Manchester, City were nearly caught cold by a rare Everton break early on when Richarlison fired the first big chance of the game over from Lucas Digne's cross.

"The biggest chance was our chance with Richarlison," Everton boss Marco Silva said.

"Against these teams we have to be effective when we create opportunities to score."

And Everton also played a big part in their own downfall at the other end when Jesus opened the scoring.

Yerry Mina's hopeful punt gifted away possession and the Colombian then played Jesus onside as the Brazilian ran onto Sane's pass to fire low past Pickford.

The England number one handed Liverpool victory in the Merseyside derby earlier this month, but Pickford wasn't so charitable to City as he made an excellent save to prevent Riyad Mahrez doubling the hosts' lead just before half-time.

The champions had to wait just five minutes after the break to make it 2-0, when a patient build-up again found Sane on the left and the German's cross was met by a powerful header from Jesus.

Everton had barely offered any threat in the second period before they got back into the game 25 minutes from time, Calvert-Lewin's header from a high-hanging Digne cross flicking off Fabian Delph and past the helpless Ederson.

Guardiola responded by sending on Sterling for Sane and in a week when the England international has bravely spoken out about the alleged racist abuse he suffered last weekend by Chelsea fans, he also made his mark on the field by scoring immediately.

"I think Raheem has handled the last few years in terms of situations and rumours, about him or his family or the colour of his skin very calmly," added Guardiola.

"I admire him and appreciate that it's not easy for him. He's loved by all staff and in the locker room."

Jesus was involved again as he freed Fernandinho inside the area and his cross picked out the unmarked Sterling to score a rare header.

De Bruyne then made his first appearance for six weeks -- just his fourth in the Premier League all season, all of which have come as a substitute -- after lengthy absences for two knee injuries.

Other than defeat to Chelsea last weekend, City have barely missed a beat without the Belgian, but the return of their player of the year in last season's record-breaking campaign is an early Christmas present for Guardiola ahead of Liverpool's visit to the Etihad on January 3.

Sergio Aguero Kevin De Bruyne English Premier League Manchester City vs Everton, Game week 17 Football
Get the latest updates on India vs South Africa and check out  Schedule, Results and Live Score. Like us on Facebook or follow us on Twitter for more sports updates. You can also download the NDTV Cricket app for Android or iOS.