Lionel Messi will break his silence over the departure from Barcelona and his future through a press conference scheduled at the Camp Nou on August 8. 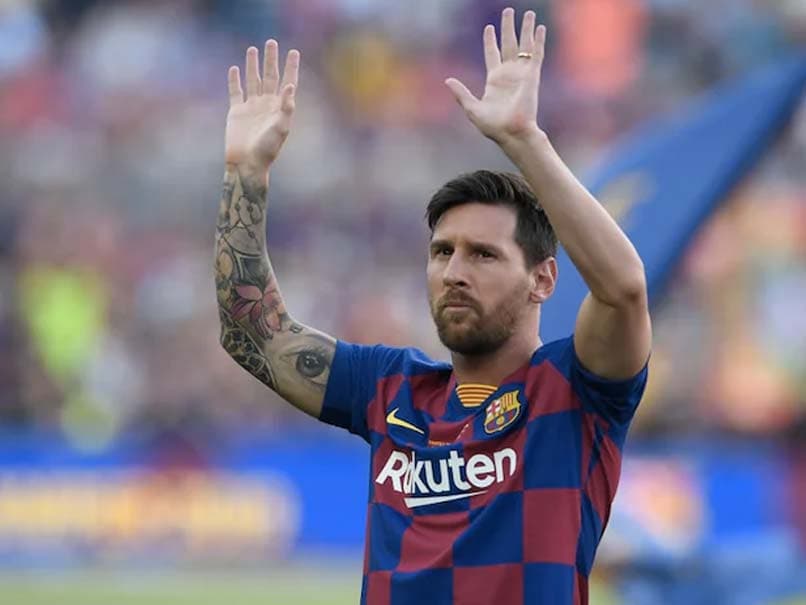 Lionel Messi is reportedly close to a move to French side Paris Saint-Germain.© AFP

Lionel Messi will break his silence over his future on Sunday, three days after financially-strapped Barcelona announced they were unable to keep the superstar who is reportedly close to a move to Paris Saint-Germain. The Spanish giants said that the 34-year-old will hold a press conference at the Camp Nou at noon (1000 GMT), without specifying the nature of the briefing. It will be his first public comments since Barcelona announced Thursday that Messi, the club's all-time top scorer and appearance maker, would be leaving after 21 years.

Barcelona president Joan Laporta said on Friday he was not prepared "to put the club at risk" by renewing Messi's contract, as the club face up to huge financial problems ahead of the start of La Liga on August 15.

Laporta said Barcelona were no longer negotiating with Messi and the Argentine forward was considering other offers.

PSG, who bought Neymar from Barcelona for a world-record 222 million euros ($264 million) in 2017, appear favourites to sign Messi according to reports in France.

Significantly, Nasser al-Khelaifi, the president of the Qatar-owned club, and sporting director Leonardo both missed the team's 2-1 win at Troyes in their Ligue 1 season-opener on Saturday night.

"There have been lots of rumours. Lots of things are being said," said PSG coach Mauricio Pochettino.

"I just hope we will be strong enough to try to win every competition we are involved in," he added.

Sports daily L'Equipe indicated Messi is to receive a three-year "record contract" with "a net annual wage of 40 million euros" -- but it appears nothing has been signed.

Funded by a sovereign wealth fund from gas-rich Qatar, PSG is seen as one of the few clubs in the world with deep enough pockets to make a bid for the six-time Ballon d'Or winner.

The Barcelona captain has been a free agent since July 1 when his contract expired.

He originally had reached agreement with Barcelona to sign a five-year contract worth 50 percent less per year.

But La Liga's financial fair play rules, which are expected to reduce the amount Barca can spend on salaries this season by some 200 million euros ($235 million), led Laporta to conclude they were unable to complete the deal.

"We could not accommodate Messi's contract," said Laporta, who was re-elected as club president in March and who said Friday he would not "mortgage" the club for anybody.

"The situation we have inherited is abominable and the sports salary bill represents 110 per cent of the club's income. La Liga's rules set limitations and we have no margin. We have known the situation since we arrived but the numbers we have seen are even worse than we thought," Laporta added.

Barcelona have total debts of almost 1.2 billion euros, with more than half of that needing to be repaid in the short term.

Many in Catalonia are struggling to accept the departure of the 34-year-old who has been with the club since he signed a contract on a napkin at the age of 13.

"Still hard to understand that you will not play for @FCBarcelona anymore," tweeted coach Ronald Koeman, the man whose goal won Barca their first European Cup in 1992.

"Thanks for everything you have done for our club Leo. I really enjoyed the full season we worked together. I am impressed with your work ethic and desire to win," Koeman added.

Angel Di Maria Football
Get the latest updates on T20 World Cup, check out the T20 World Cup Schedule and Live Score . Like us on Facebook or follow us on Twitter for more sports updates. You can also download the NDTV Cricket app for Android or iOS.