Barcelona suffered another blow to their La Liga title hopes after a 2-2 draw with Atletico Madrid on Tuesday. 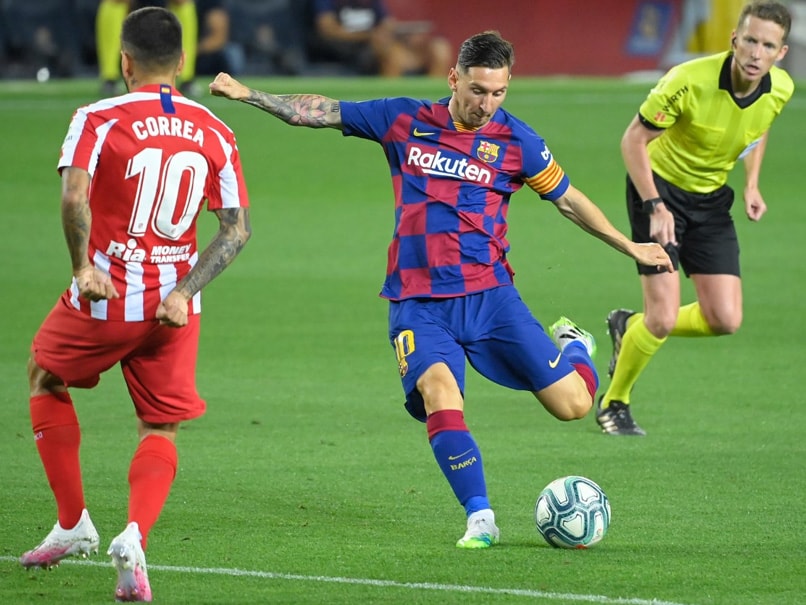 Lionel Messi chipped in a penalty to reach another astonishing milestone at Camp Nou.© AFP

Lionel Messi scored his 700th career goal but Barcelona suffered another blow to their La Liga title hopes after a 2-2 draw with Atletico Madrid on Tuesday. Messi chipped in a penalty to reach another astonishing milestone at Camp Nou but twice Atletico hit back with spot-kicks of their own, Saul Niguez converting both after Barca took an early lead through Diego Costa's own goal. The result gives Real Madrid the chance to move four points clear at the top of the table if they can overcome Getafe at home on Wednesday, a formidable lead with five games left. Atletico stay third, two points ahead of Sevilla, who won 3-0 at Leganes.

With a superior head-to-head, it would take a dramatic capitulation for Real Madrid not to lift the trophy from here but there is no guarantee Barcelona can finish strongly enough even to create pressure.

This was their third draw in four matches and with suggestions of disharmony between the players and coaching staff, the future of coach Quique Setien looks bleak too.

"From the dressing room I feel supported, yes," he said. "And regarding the meeting with the board, I will not say what was said in that."

Setien was also asked about his job on Monday and had to play down the significance of a frank exchange of views in the dressing room following Saturday's draw at Celta Vigo.

Messi had also caused a stir by appearing to ignore Setien's assistant Eder Sarabia during a water break at Vigo and on Tuesday it was impossible to ignore the contrast with Atletico's players, who huddled around Diego Simeone while 50 metres away Setien stood alone.

At full-time, Setien stared into space with the look of a coach that is running out of time but he had taken bold decisions, leaving 120-million-euro signing Antoine Griezmann on the bench and handing another start to 20-year-old Riqui Puig.

"It's true that taking him out of the team like that is hard for a player of his level but the circumstances forced me to do it," said Setien of Griezmann. "Tomorrow I will speak to him, not to apologise, but it is a decision he has to understand."

- Costa nightmare -
Yet it started well for them as Costa endured a nightmare first quarter of an hour, first diverting Messi's corner into his own net after misjudging the flight of the ball at the near post.

Then he missed a penalty, won after the excellent Yannick Carrasco left Gerard Pique for dead and then cut back inside Arturo Vidal, who stuck out a leg.

Costa's shot was saved but VAR showed Marc-Andre ter Stegen had sprung off his line too early and Atletico were given a second chance. This time Saul took the ball and he scored the equaliser.

Messi dinked over the sliding Renan Lodi and then whistled a curling effort past the far post. His deflected free-kick forced Jan Oblak to adjust his feet and palm over.

Finally, it was laid on a plate for him shortly after half-time. Felipe clipped Nelson Semedo and Messi, with the 700th in sight, chipped the ball delicately down the middle.

But every time Barca pulled away, Atletico pegged them back. Another penalty was awarded, again instigated by the speedy Carrasco, who made the most of the slightest touch from Semedo.

Saul took responsibility again and while Ter Stegen got a hand to it, the ball squirmed into the corner.

Vidal twice went close, the second time heading wide Jordi Alba's cross, and Thomas Lemar might even have won it for Atletico in injury-time. For Barca, the draw was damaging enough.

Earlier, Sevilla's Oliver Torres scored twice and Munir El Haddadi added a third to see off Leganes and boost their hopes of holding onto fourth place.