Real Madrid registered a narrow 1-0 win over bottom club Espanyol to open a two-point lead over Barcelona at the top of La Liga. 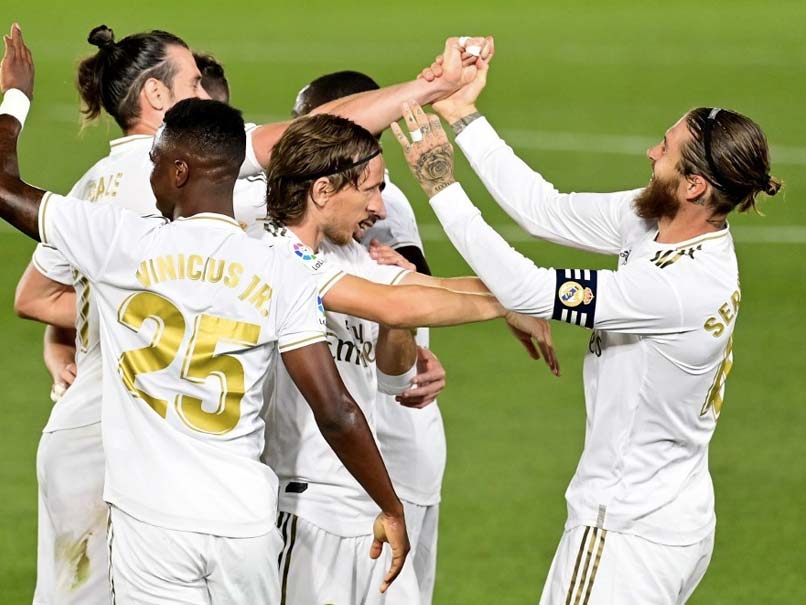 Karim Benzema delivered another moment of magic on Sunday as Real Madrid took a two-point lead over Barcelona at the top of La Liga by beating bottom club Espanyol. Benzema's volley against Valencia could be goal of the season and he might now have a claim to best assist too after his brilliant backheel teed up Casemiro to finish for a crucial 1-0 win. Madrid's advantage in the table, coming after Barca's draw away at Celta Vigo on Saturday, is their biggest since February and puts them within sight of their second league title in eight years.

"It's a very important win," said Benzema. "I can't say we don't look at Barcelona, of course we do. But we're focused on our own league. There are not many games left and every game now is a final."

"He took a big hit but it's just a knock I think," said Zidane.

By the time his side play at home to Getafe on Thursday they might even have the chance to move further clear, if in-form Atletico Madrid avoid defeat on Tuesday at Camp Nou.

Barcelona certainly have the harder run-in, with a resurgent Villarreal side to follow Atletico and then local rivals Espanyol, who have shown they might yet finish strong after a determined performance under new coach Franciso Rufete.

Rufete, who was previously the club's sporting director, is Espanyol's fourth coach of the season after the sacking of Abelardo Fernandez on Saturday.

His task is now to make up a nine-point gap between his team in 20th and Celta in 17th.

They were undone by a piece of instinctive brilliance from Benzema, who has been the catalyst for Madrid sealing five wins out of five since La Liga restarted on June 11.

Benzema's backheel came on an afternoon of sensational assists after Villarreal's Santi Cazorla earlier set up Gerard Moreno with an incredible, cushioned touch in their 2-0 win over Valencia.

"I have to give huge credit to Karim," said Casemiro. "It was an incredible assist. We're used to how good he is, I know the quality he possesses so I was expecting something. He heard me asking for it and he played it in a brilliant way."

Madrid, though, were scruffy and ponderous at the RCDE Stadium, this perhaps their least impressive win over the last three weeks.

But solidity and steel ensured they came through unscathed and it was no surprise that defensive midfielder Casemiro, arguably the team's best player this term, was named man of the match.

Espanyol were far from outplayed and might have been ahead if they had capitalised on a series of forays down Madrid's left in the first half.

With Marcelo repeatedly caught up field, Wu Lei was able to sprint clear and his early pull-back was met by Sergi Darder at the back post, only for his shot to be blocked by Dani Carvajal.

A scrap in the penalty area ended with Diego Lopez palming over a half-volley from the quiet Eden Hazard.

Espanyol were hanging on for half-time and they were caught out by Benzema.

Ramos flicked on Marcelo's crossfield pass and Benzema, moving away from goal, backheeled off the bounce through the legs of Bernardo Espinosa for the arriving Casemiro to finish.

Wu had another chance early in the second half but scuffed his shot and both teams seemed content to let the score lie until the latter stages, when Espanyol began to take more risks.

Their best chance came in the 87th minute when a free-kick evaded the entire Madrid defence but Leandro Cabrera was just short at the back post. Marcelo almost deflected into his own net for the last action before the whistle blew.

Earlier, Villarreal continued their surge towards Champions League qualification with a victory over Valencia, inspired by Cazorla.

The 35-year-old found himself under a 60-yard punt from his goalkeeper before cushioning the ball out of the air perfectly for Gerard Moreno to volley in.