Luis Suarez twice put Barcelona in front at Balaidos with his first goals since January but Iago Aspas bent in a late free-kick to earn Celta Vigo a draw. 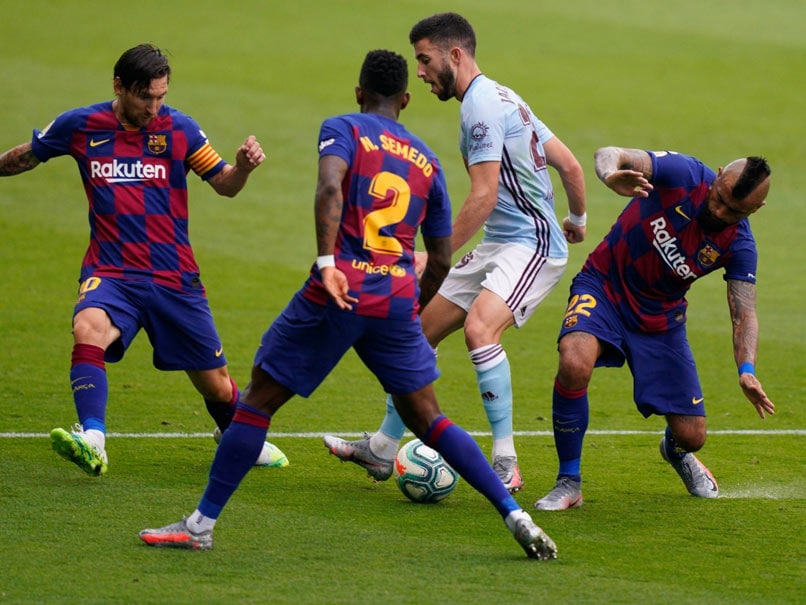 Celta Vigo came from behind twice to earn a late draw against Barcelona.© AFP

Barcelona's title hopes suffered a hammer blow on Saturday as they were held to a 2-2 draw by Celta Vigo, handing Real Madridthe chance to move two points clear at the top of La Liga. Luis Suarez twice put Barca in front at Balaidos with his first goals since January but Iago Aspas bent in a late free-kick to earn Celta a draw, in what could prove a pivotal moment in the title race. Barcelona edge a point ahead of Madrid but Zinedine Zidane's side will hope to take a big step towards becoming champions by winning away at bottom club Espanyol on Sunday.

Madrid own the superior head-to-head against Barca and have won four out of four since La Liga restarted earlier this month. With a kinder run-in than the Catalans, who play Atletico Madrid next on Tuesday, the trophy appears to be Madrid's to lose.

"The feeling is a negative one," said Suarez afterwards. "If we want to stay in the title race and have it in our hands we have to win all our games. But we now have to rely on Madrid to drop points."

Suarez played his best game since undergoing knee surgery in January, his first goal coming from a surprise free-kick from Lionel Messi, who crossed when everyone expected him to shoot.

Yet Barcelona's defensive frailties hurt them again and Celta should even have won it in injury-time, only for Nolito to miss a golden chance at the back post.

Antoine Griezmann was left on the bench and when he came on, he was on the side of the wall that Aspas breached with his free-kick to find the bottom corner.

Messi was at the heart of everything going forward and it was his early corner that Gerard Pique headed against the crossbar.

With a free-kick on the edge of the area in the 20th minue and a 700th career goal in sight, Messi sized up the sprawl of Celta defenders in front of him.

But with everone expecting a shot, Messi clipped a cross towards the post, where Suarez headed in.

Messi even tried to score from a corner but Celta had chances too on the break. A poor clearance from Marc-Andre ter Stegen went unpunished by Fedor Smolov, who then overhit his pass when Aspas was clear. Brais Mendez slid through and hit the post.

The warnings went unheeded and when Arturo Vidal played a careless pass early in the second half, Celta capitalised.

Aspas sent Okay Yokuslu sprinting in behind and he squared for Smolov to tap in.

Celta look invigorated but Barca landed a sucker-punch. Denis Suarez lost possession under pressure from Fati, Messi played into Luis Suarez, who backed in, turned and drove into the far corner.

It looked like they had weathered the storm but Celta hit back again, Aspas curling around the side of the wall and into the corner with two minutes left.

They should even have won it in injury-time as Denis Suarez teed up Nolito at the back post but a scuffed finish let Ter Stegen save on the line.