Quique Setien said Barcelona players have a good relationship amid talks of tension between Lionel Messi and his assistant Eder Sarabia. 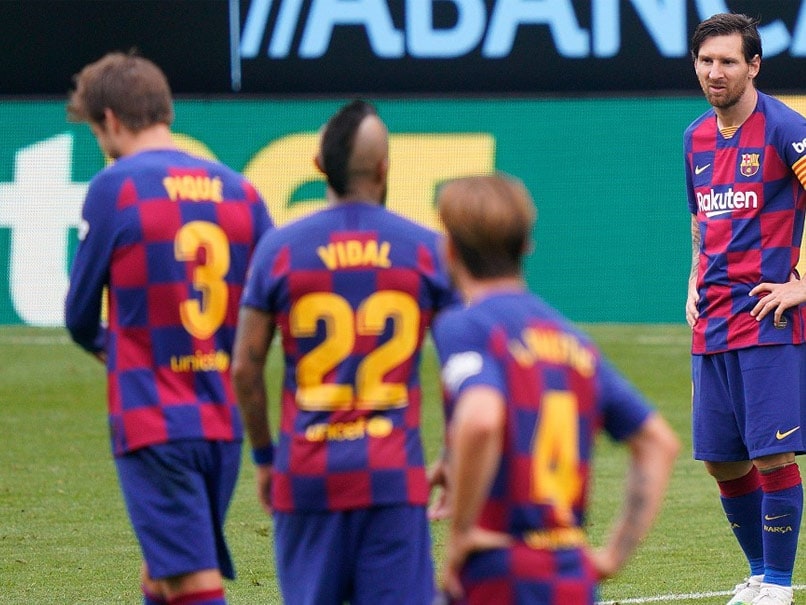 There have been reports of tension between Lionel Messi and Barcelona assistant manager Eder Sarabia.© AFP

Barcelona coach Quique Setien insists his relationship with the players is good, despite reports of unrest in the dressing room and tension between Lionel Messi and Setien's assistant, Eder Sarabia. An angry exchange of views reportedly followed Barca's 2-2 draw at Celta Vigo on Saturday, a result that allowed Real Madrid to go two points clear at the top of La Liga by beating Espanyol. Footage also appeared to show Messi pointedly ignoring Sarabia, with the Argentinian turning away from Setien's number two as he tried to give him instructions during a cooling break.

A lack of togetherness comes at a bad time given Barcelona host in-form Atletico Madrid on Tuesday, when another slip could effectively concede the title.

"There are always controversies, like in life, because we all have our own way of seeing things and thinking," said Setien in a press conference on Monday.

"But this is normal. I was not an easy player to deal with either. You have your own vision and the important thing is to convince everyone to defend a common cause.

"But I see it as something natural. I think the communication is good and I don't attach importance to specific incidents."

Barcelona were leading 2-1 against Celta at Balaidos with two minutes left when Iago Aspas scored from a free-kick given away by Gerard Pique.

On the suggestion of arguments in the dressing room after the match, Setien said: "When you don't win and when there is a one-off moment like that free-kick, everyone looks for something. This is the circus we're involved in."

"We are concerned with more general aspects. The relationship with the players is good. There are specific moments when there may be differences of opinion but I don't perceive any problem that is worth mentioning, far from it."

Setien confirmed another meeting took place with the players on Sunday. "Yesterday we talked about many things but we focused on football, on doing things better, on this situation we are in where we are not converting superiority into goals, which then results in nervousness and frustration."

Barcelona have been accused in the past of pandering to senior players like Messi, Pique and Sergio Busquets, who have all achieved incredible success at the club.

Asked if they have too much power, Setien said: "We all have to sacrifice a part of ourselves, including the players, for the good of the team. I cannot tell a winger who likes to attack to defend.

"I have no problem admitting this is a new situation for me and I am in a period where you learn a lot and you go little by little doing the things you want to do. But that's nothing to do with the players, it's a process that needs time."

Barcelona midfielder Arthur Melo came on as a substitute against Celta even as the 23-year-old is expected to join Juventus at the end of the season in a deal that will see Miralem Pjanic go the other way.

The exchange will enable Barca to balance the books before the end of the financial year on June 30, by registering Arthur's sale for around 70 million euros immediately while spreading the Pjanic payments over the length of his contract.

"We expect maximum commitment from him until the last day he is here," said Setien. "He is still a Barcelona player until the end of the season and has promised that he will give everything to achieve the goals we have set."

Arthur is in the squad to face Atletico, along with Busquets, who returns from suspension, and Sergi Roberto, who is fit again. Frenkie de Jong is out with a calf injury.