Real Madrid currently top La Liga with two wins from two games. They are still missing Cristiano Ronaldo due to the knee ligament injury that forced him off during Portugal's Euro 2016 final victory over France 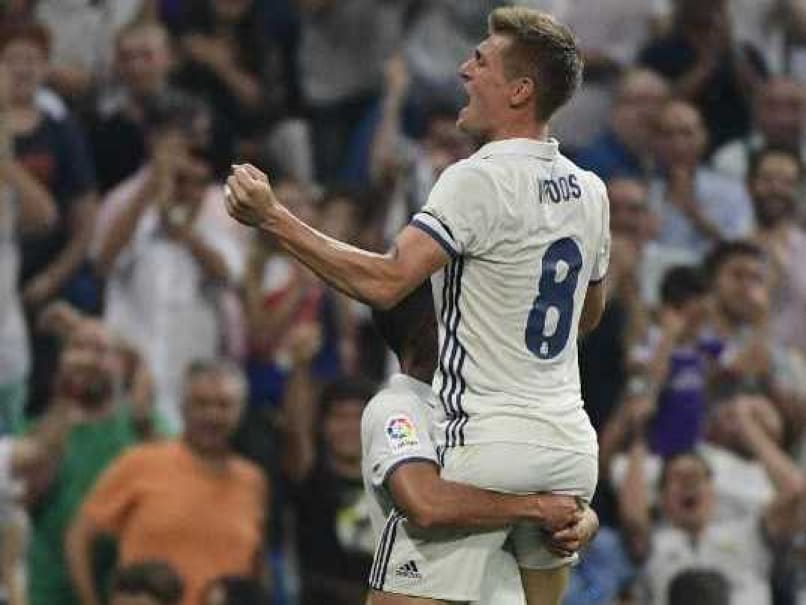 Real Madrid shrugged off the absence of the injured Cristiano Ronaldo to extend their perfect start to the season and a La Liga win streak to 14 games with a 2-1 victory over Celta Vigo on Saturday night.

Alvaro Morata looked to have Real on their way to another three points when he eventually broke Celta's resistance by smashing home on the hour mark.

Fabian Orellana curled home a spectacular equaliser 24 minutes from time, but Toni Kroos's sublime low strike in off the inside of the post secured all three points for the hosts 10 minutes from time.

"I am left with the fact the players believed until the end and we achieved what we wanted."

Ronaldo was still absent from the knee ligament injury that forced him off during Portugal's Euro 2016 final victory over France.

In his absence, Gareth Bale was expected to lead Real to another comfortable win after continuing his sensational form with Wales at the Euros with two goals in a 3-0 victory at Real Sociedad last weekend.

However, Bale endured a frustrating night and it was another former Tottenham Hotspur star in Luka Modric who shone in a tight first half with two long-range efforts that forced Sergio Alvarez into fine saves, while a third effort from the Croatian came back off the bar.

Celta were without both their top scorers from last season with Iago Aspas left on the bench and Nolito having departed for Manchester City.

Theo Bongonda was a constant threat for the visitors, but his fine wing play went unrewarded as former City and Celtic striker John Guideitti failed to get on a series of dangerous crosses to start the second half.

Bale came to life after the break when Alvarez got a fingertip to send his viciously dipping free-kick over the bar.

Morata was handed his second home debut after returning from a two-year spell at Juventus with Karim Benzema also sidelined.

And he took full advantage by firing home the rebound after Alvarez had denied Marco Asensio.

Real's joy was short-lived, however, as Orellana took advantage of the time he was given at the edge of the area to fire home a fine equaliser six minutes later.

However, Kroos was Real's hero as the German brilliantly measured a side-footed effort in from 25 yards to the relief of the Bernabeu.

Earlier, Valencia's disastrous start to the campaign continued as they lost 1-0 at Basque minnows Eibar to follow-up a 4-2 thrashing at home by Las Palmas on Monday.

Pedro Leon scored the only goal of the game with Valencia missing captain Paco Alcacer ahead of his expected move to Barcelona.

Comments
Topics mentioned in this article
Real Madrid Celta Vigo Atletico Madrid Valencia Barcelona Cristiano Ronaldo Toni Kroos Gareth Bale Alvaro Morata Santiago Bernabeu Football
Get the latest updates on ICC T20 Worldcup 2022, check out the Schedule and Live Score. Like us on Facebook or follow us on Twitter for more sports updates. You can also download the NDTV Cricket app for Android or iOS.