Lionel Messi underlined his worth to Barcelona by scoring a sensational free-kick on Sunday as the Catalans registered a 2-1 win over Athletic Bilbao. 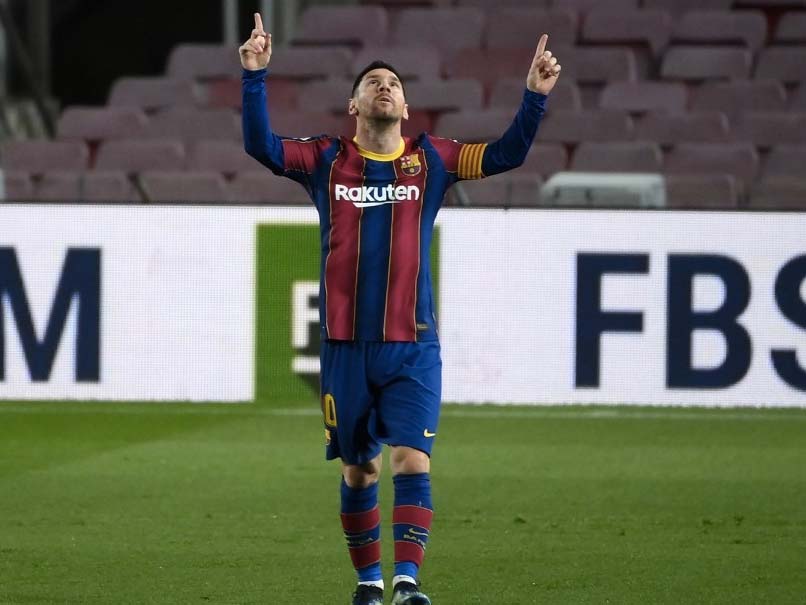 Lionel Messi underlined his worth to Barcelona by scoring a sensational free-kick on Sunday but Atletico Madrid are in charge of La Liga after beating Cadiz to stand 10 points clear at the top of the table. Messi's stunning effort in a 2-1 win over Athletic Bilbao had been matched by the Argentinian's friend and former team-mate Luis Suarez, who earlier curled in a superb free-kick of his own in Atletico's 4-2 victory over Cadiz. Atletico end the weekend even further ahead after Real Madrid's defeat by Levante on Saturday, which means Zinedine Zidane's side are now level with Barca on points, both of them struggling to keep pace in the title race.

"Every game is an important step towards reaching the goal we set ourselves at the start of the season," said Diego Simeone. "We have to keep pushing each other."

Barca's win at least maintains their momentum while Messi's 650th club goal may have carried extra satisfaction for the Argentinian, who had the details of his contract published in the Spanish newspaper El Mundo on Saturday night.

El Mundo claimed the deal signed by Messi in 2017 shows he could earn up to 555 million euros over its four years, describing it as "the colossal contract that ruined Barcelona".

"Someone has done it with bad intentions to cause problems," said Ronald Koeman. "You have to respect a player who has given so much to Spanish football and to this club. I didn't have any doubts that it wouldn't affect him on the pitch."

Few can argue with Messi's contribution in that regard, with the 33-year-old showing against Bilbao why the club have gone to such lengths to keep him.

Asked what Messi worth is to the team, Griezmann said: "What a question, we are enjoying him, he is a legend. I hope we can keep enjoying him for many more years."

But Barcelona continue to be haunted by the spectre of Suarez, whose tremendous free-kick and then a penalty helped Atletico push their advantage into double figures.

While Messi's free-kick was closer and bent perfectly into the top right-hand corner, Suarez's shot was further out and hit harder, a fizzing effort that curled into the left side of the net.

"The other day they were practising free-kicks," said Simeone. "I told him we had not seen him score many goals from free-kicks so that's why I smiled when I saw him score this one."

"After spending so long at Barca with Messi, it was difficult," added Suarez.

He was the driving force again, his two goals making it nine in his last eight games and 14 now for the season.

His goals and assists have now earned Atletico 12 extra points in the league, with Barcelona's decision to let him leave, especially for title rivals, seeming more misjudged by the week.

It could get even worse for them and Real Madrid, given Simeone's side still have a game in hand over each of them.

Both would have been given hope by a rousing display from newly-promoted Cadiz, who were inspired by the relentless Alvaro Negredo.

The 35-year-old scored twice, could have had a hat-trick and certainly did not deserve to be on the losing side.

But Suarez's double, between goals from Saul Niguez and Koke late on, sealed another three points for Atletico, who now have the La Liga crown within reach, even with half of the season left to play.

Luis Suarez Football
Get the latest updates on SA vs IND 2021-22, check out the Schedule and Live Score . Like us on Facebook or follow us on Twitter for more sports updates. You can also download the NDTV Cricket app for Android or iOS.