La Liga: Diego Costa Back On Target As Atletico Madrid Held To 1-1 Draw By Athletic Bilbao

Diego Costa scored his first goal since October but Atletico Madrid missed the chance to move into La Liga's top four by drawing 1-1 away at Athletic Bilbao. 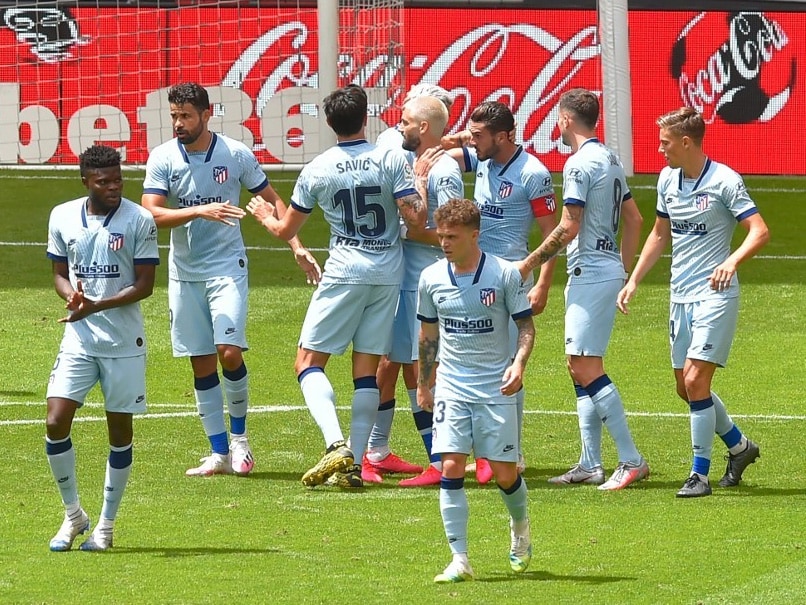 Diego Costa scored the equaliser for Atletico Madrid in the 39th minute.© AFP

Diego Costa scored his first goal since October but Atletico Madrid missed the chance to move into La Liga's top fourby drawing 1-1 away at Athletic Bilbao on Sunday. Costacelebrated by holding up the shirt of Virgina Torrecilla, a player from Atletico's women's team, who underwent surgery on a brain tumour last month. His equaliser came two minutes after the excellent Iker Muniain had given Bilbao the lead towards the end of the first half and neither side could find a winner at the empty San Mames, with Atletico defender Santiago Arias missing the best chance late on.

This was always going to be one of the tougher games in Atletico's run-in but it was still an opportunity missed after fellow top-four hopefuls Valencia and Getafe both failed to win on Saturday.

Diego Simeone's sidestay sixth, now level on points with both Getafe and Real Sociedad in front of them, although la Real have a game in hand against Osasuna to come later on Sunday.

Atletico have been among the worst-hit Spanish teams financially by the coronavirus pandemic and reports in Spain this week have suggested the club would stand to lose around 100 million euros if they fail to qualify for next season's Champions League.

They are still favourites to pip Real Sociedad, Getafe and Valencia to fourth place but their away form is a concern, with this their fifth league game in a row on the road without a victory.

The only team they have beaten away this year is Liverpool.

But Atletico's run-in appears kind, with a visit to Camp Nou the only troublesome-looking fixture before they play Real Sociedad at home on the final day.

And Costa's goal will have been welcome too after the 31-year-old had just returned from three months out with a herniated disc injury before games were suspended in March.

His gesture of support for Torrecilla did not go unnoticed either. She posted a message on Twitter with a picture of Costa's celebration that said: "I have no words...You are amazing! Thanks from the bottom of my heart".

Bilbao took the lead with an impressive team goal as Inaki Williams switched to Yuri Berchiche on the left and he faked to cross before pulling back to Muniain, who skilfully cut the ball into the corner.

They deserved their lead but squandered it almost instantly. Yeray Alvarez looked up to the sky in frustration after skewing a clearance but Saul Niguez had already fed Koke. He poked a pass through to Costa, who applied the finish.

Alvaro Morata replaced Costa as one of 10 changes made by both coaches but the best chance fell to Atletico's right back Arias, also on off the bench.

Renan Lodi's cross spilled out to him at the back post but with the corner briefly gaping, Unai Simon scrambled across to make the save.