Atletico Madrid's comfortable win puts them above Real Madrid in the La Liga table and level on points with Barcelona. 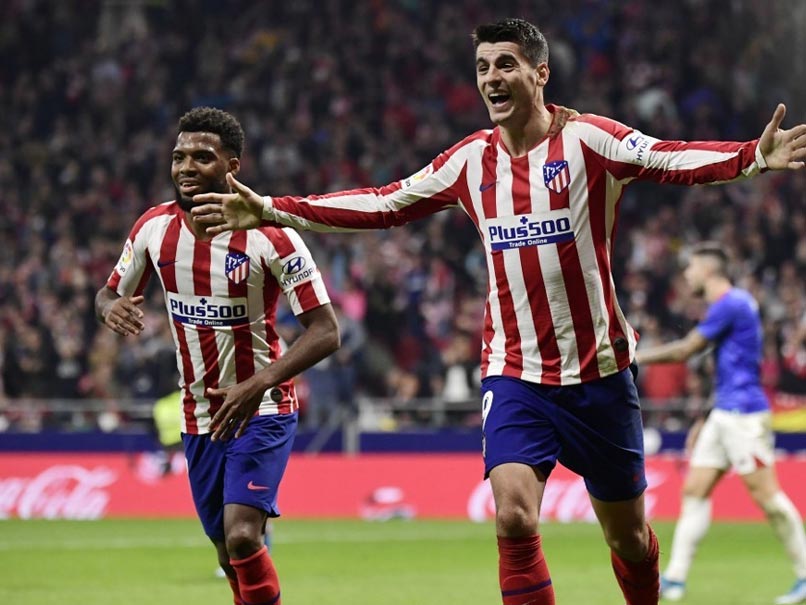 Diego Simeone's decision to leave out Diego Costa was vindicated on Saturday as Atletico Madrid beat Athletic Bilbao and Costa's replacement Alvaro Morata scored in the 2-0 victory. Alvaro Morata had been the one to sit on the bench against Bayer Leverkusen on Tuesday but his winning goal as a substitute earned him a start against Bilbao and the Spaniard delivered again. "The changes were good for the team," said Simeone. "It was a great performance." Morata's finish in the second half at the Wanda Metropolitano, after Saul Niguez had opened the scoring, secured Atletico a comfortable win that puts them above Real Madrid in the La Liga table and level on points with Barcelona.

The postponement of the Clasico due to unrest in Catalonia gave Simeone's side the chance to close the gap on the top two and sustain momentum from their gritty win in the Champions League.

Morata had rescued Atletico against Leverkusen but the decision to omit him, and now Costa, suggests Simeone feels there is a need for fresh thinking up front.

Since missing the first two games of the season with a thigh injury, Costa had started all 10 thereafter, despite managing to score only two goals, one of them from the penalty spot.

It remains to be seen if Simeone will leave him out for long but Correa was the provider for both of Atletico's goals while Morata's smile after coming off late on suggested he thought his was a job well done.

"Correa did very well, he showed what he can do," Simeone said. "Morata now has two goals in two games and we want Diego to get in on the act as well, because he is important for us too."

This was only the third time in 13 games this term that Atletico have won by more than a single goal and there were other positives to take too.

Koke, whistled by his own fans on Tuesday, improved and there was a clean sheet for an unfamiliar back four, in the absence of injured duo Stefan Savic and Jose Gimenez.

Bilbao, who slip to 10th, were disappointing and have now lost three of their last five games, drawing the other two.

Yet they might have been ahead in the opening two minutes had Jan Oblak not dived to his right and brilliantly clawed Inigo Martinez's header away from the top corner.

"He is the best goalkeeper in the world without any doubt," said Simeone.

Atletico took the lead in the 28th minute and Correa provided it, his wiggling run through three Bilbao defenders ending with a poked pass to the arriving Saul, who made no mistake.

Kieran Trippier did well to block a stinging shot from Raul Garcia and he was involved in his side's second shortly after the hour.

He collected the ball on the right from Thomas Partey's pass and set the ball back for Koke. Bilbao expected the cross but instead Koke slid a ball inside for Correa, who drove the ball to the back post where Morata could not miss.

Muniain went close late on with an acrobatic volley after Inaki Williams' header found him free but his shot found the side-netting and any hopes of a comeback were dashed.

Diego Costa Football
Get the latest updates on IPL Auction 2023 and check out  IPL 2023 and Live Cricket Score. Like us on Facebook or follow us on Twitter for more sports updates. You can also download the NDTV Cricket app for Android or iOS.