La Liga is unhappy because it had proposed December 4 or 7 as the new El Clasico date but the Spanish federation confirmed that the match will be played on December 18. 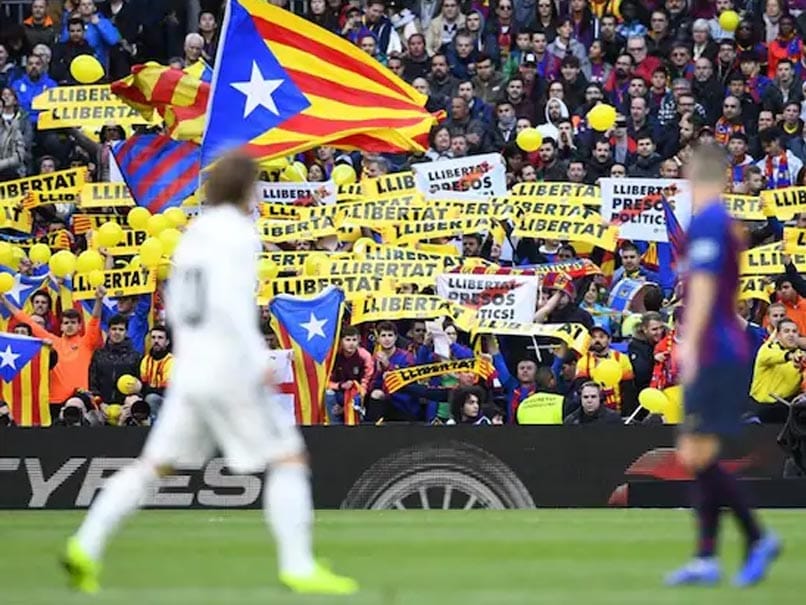 Before it was postponed, Barcelona were scheduled to host Real Madrid on October 26.© AFP

The rearranged El Clasico between Barcelona and Real Madrid will be played on December 18 despite opposition from La Liga, the Spanish Football Federation (RFEF) confirmed on Wednesday. Spain's most prestigious fixture, which was due to take place at Camp Nou on Saturday, was postponed last week because of violent pro-independence protests in Catalonia. La Liga had proposed December 4 or 7 and have said they are considering an appeal. "The league does not agree with the decision," La Liga said in a statement.

"It is studying the documentation to decide whether to appeal, against whom and before what bodies."

An earlier statement from the RFEF read: "The decision of the Competition Committee has taken place after analysing in recent days the proposals of both clubs, who were invited to agree a date and decided on December 18.

"It has also analysed a report from the RFEF Competitions Area as well as numerous reports submitted by La Liga, which are not binding.

"At today's meeting, the Committee also analysed the latest reports from both clubs, who maintain their initial proposal to play the match on 18 December."

It means Barcelona, who wanted the match to go ahead as originally planned this weekend, will face a testing few weeks before Christmas.

In December, they are already scheduled to play away at Atletico Madrid, Inter Milan in the Champions League and Real Sociedad, who sit fourth in La Liga.

Real Madrid will play away at Club Brugge in the Champions League and then Valencia, just before travelling to Barca.

But both clubs swiftly settled on Wednesday, December 18 last week, hours after being instructed to agree a new date by the RFEF.

La Liga, who originally proposed the postponement, disagreed, claiming December 18 would clash with fixtures in the Copa del Rey and harm the economic interests of the clubs involved.

"The decision to change the date of the most important La Liga match cannot be left to the decision of the two participating clubs," La Liga said on Friday, adding that they have a responsibility to "maximise income" from television rights.

La Liga initially suggested swapping the two Clasicos, with the first one being played at the Santiago Bernabeu in Madrid, and then proposed the weekend of December 7, when Barcelona and Madrid already have fixtures.

Their last proposal was Wednesday, December 4, which comes just after Barca play away at Atletico Madrid.

Barcelona coach Ernesto Valverde said on Tuesday he hoped the two clubs would not be drawn into a political "war" between La Liga and the RFEF, who have clashed on various issues in recent years.

"I would like common sense to prevail," Valverde said "I would like there to be a date settled and for the internal wars between La Liga and the RFEF not to involve us."

Barcelona, who visit Slavia Prague in the Champions League on Wednesday, moved top of La Liga last weekend, one point ahead of Real Madrid.

Real Madrid Football
Get the latest updates on SA vs IND 2021-22, check out the Schedule and Live Score . Like us on Facebook or follow us on Twitter for more sports updates. You can also download the NDTV Cricket app for Android or iOS.