Atletico Madrid had 19 shots and, unusually for them, dominated possession. 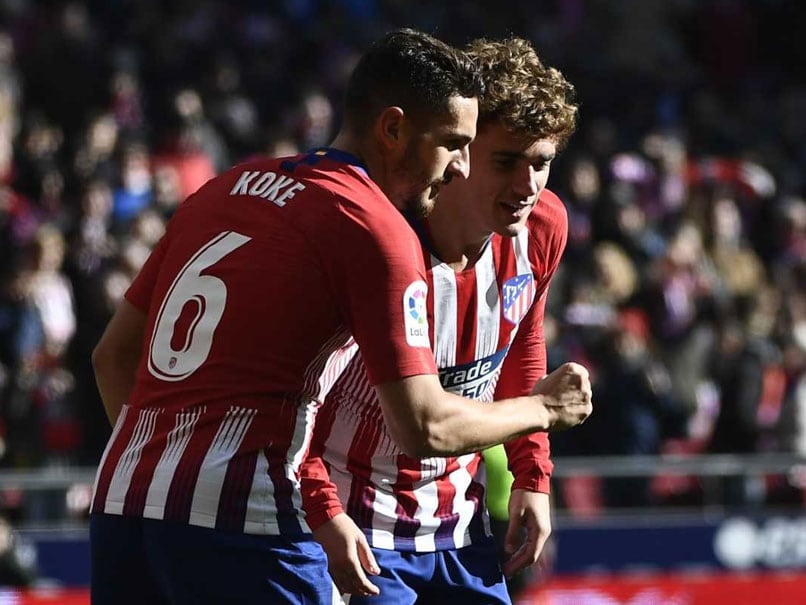 Antoine Griezmann came to the rescue again as Atletico Madrid kept the pressure on Barcelona at the top of La Liga on Sunday by edging past Levante. Griezmann has now scored all of Atletico's last six goals and this latest one, from the penalty spot, proved the difference in a cagey contest at the Wanda Metropolitano. A 1-0 victory for Diego Simeone's side cuts the gap from five points to two behind Barca, who will restore their advantage with a win over Eibar later on Sunday.

Levante, who have not won in the league since December 3, stay 11th.

Atletico had 19 shots and, unusually for them, dominated possession but they continue to rely on Griezmann's excellent scoring run for points.

"We all pull the cart in difficult moments," Griezmann said. "I cannot do anything without my team-mates."

But, in their last five games, it is the Frenchman's goals that have earned wins over Levante, Real Valladolid and Espanyol, while sparing them defeats away to Sevilla and Girona.

Griezmann was persistent in expressing his desire to win the Ballon d'Orin December but since the prize went to Real Madrid's Luka Modric, he has hit seven goals in seven games. Perhaps a sharpening of focus has done him good too.

He could have scored early but feathered Angel Correa's cross wide while Koke thought he had, tucking Vitolo's pass neatly into the corner, only for VAR to find a foul in the build-up.

In between, Stefan Savic sustained a thigh injury and was replaced by Jose Gimenez, who has himself only recently returned from a calf problem, with this his first league appearance since December 8.

After a nervy start, Levante began to frustrate their opponents, whose poor decision-making in the final third had Simeone flailing on the touchline.

It seemed likely the pressure would pay, however, and 12 minutes into the second half so it proved, as Thomas Partey's cutback struck the hand of Nikola Vukcevic, who had slid to block but left his arm outstretched behind his back. Griezmann banged the penalty into the roof of the net.

Atletico could have made it more comfortable late on but Vitolo's shot whistled past the post, Partey powered over and Thomas Lemar found the angle too tight. One was just enough.

Levante Football
Get the latest updates on ICC T20 Worldcup 2022, check out the Schedule and Live Score. Like us on Facebook or follow us on Twitter for more sports updates. You can also download the NDTV Cricket app for Android or iOS.