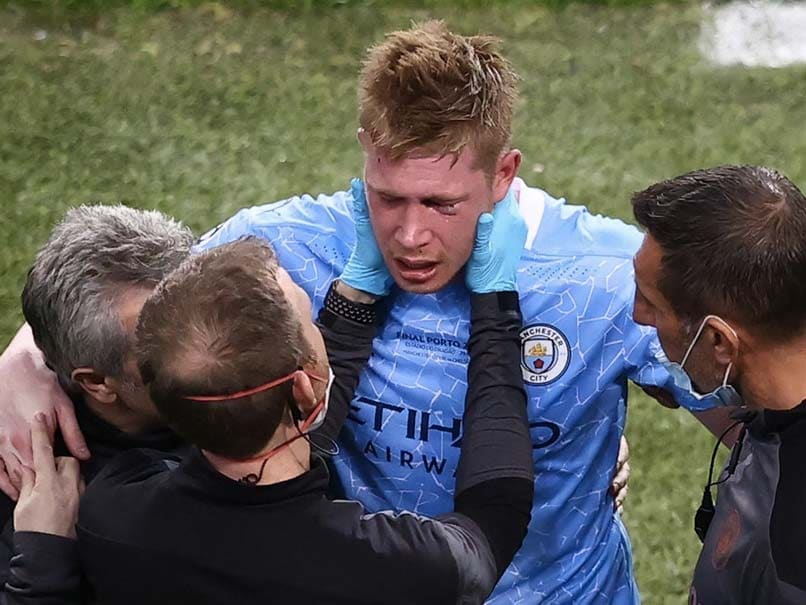 Kevin de Bruyne left the field in tears after colliding with Antonio Rudiger on Saturday.© AFP

Kevin De Bruyne is a major doubt for Belgium's Euro 2020campaign after suffering two facial fractures in Manchester City's Champions League finaldefeat to Chelsea on Saturday. De Bruyne was helped off the field in tears after colliding with Antonio Rudiger on the hour mark in Porto. The midfielder's left eye immediately appeared swollen. Without his creativity, Chelsea comfortably held out for a 1-0 win to keep City waiting for Champions League glory.

"My diagnosis is acute nose bone fracture and left orbital fracture. I feel okay now. Still disappointed about yesterday obviously but we will be back."

Belgium's first match of the Euro is in 11 days' time against Russia in Saint Petersburg.

Roberto Martinez's team then face Denmark and Finland in what should be a comfortable group for the number one ranked side in the world.

Manchester City Kevin De Bruyne Football
Get the latest updates on Olympics 2020, Olympics 2020 Medal Tally, Live Cricket Score . Like us on Facebook or follow us on Twitter for more sports updates. You can also download the NDTV Cricket app for Android or iOS.