La Liga: Real Madrid sit behind Atletico on goal difference, but have the better head-to-head record, which is how level teams are split at the end of the season. 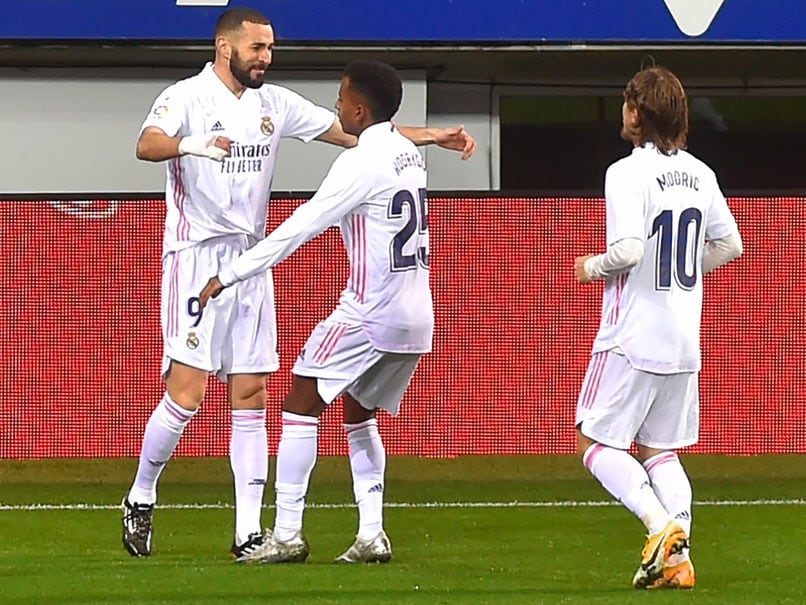 Karim Benzema was described as "phenomenal" after scoring the opening goal and creating two others.© AFP

Karim Benzema was described as "phenomenal" after scoring the opening goal and creating two others as Real Madrid won 3-1 at Eibar on Sunday to move level on points with city rivals Atletico at the top of La Liga. Benzema and Luka Modric scored inside the first 13 minutes in the Basque Country to put Zinedine Zidane's men on their way to a fourth straight league win, with Lucas Vazquez scoring a late third after Garcia Kike pulled one back for Eibar. "He is decisive. What he does is phenomenal," said Real coach Zinedine Zidane in praise of French compatriot Benzema.

"Not just in terms of goals. I'm repeating myself on Karim, but he doesn't just score goals. Karim brings clear-sightedness to our game, that's very important.

"When he scores it's even better, but beyond that he is very important to us."

Real sit behind Atletico on goal difference, but have the better head-to-head record, which is how level teams are split at the end of the season.

Diego Simeone's Atletico have two games in hand, though, after Saturday's 3-1 success against Elche.

Fifth-placed Barcelona are eight points adrift of the Madrid pair following their 2-2 draw this weekend with Valencia.

Eibar started brightly, but fell behind in the sixth minute as Rodrygo fed Benzema to slot in his seventh league goal of the season.

Benzema, who was also hailed by Zidane as the greatest ever French centre-forward earlier this week, created the second goal seven minutes later, cutting inside and picking out Modric who fired home right-footed.

The striker should have doubled his tally in the 16th minute, but he headed Modric's cross past the post.

Real went close to a third goal again when home goalkeeper Marko Dmitrovic kept out Rodrygo's close-range effort, but Eibar got themselves back into the match in spectacular style before the half-hour mark.

Kike collected the ball outside the area before curling a fine finish past Thibaut Courtois.

Benzema thought he had restored the visitors' two-goal lead before half-time, but was flagged for a marginal offside, with VAR upholding the linesman's decision.

Eibar, sitting 14th in the table, wasted an excellent chance to equalise 11 minutes after the break, as Takashi Inui shot wide following a rare mistake from Real captain Sergio Ramos.

The reigning champions struggled to put the game to bed in the second half, with Marco Asensio striking a free-kick narrowly off target shortly after coming on as a substitute.

The capital giants survived a late scare when VAR decided not to award Eibar a penalty after the ball struck Ramos's arm.

Vazquez wrapped up the points in injury time with a cool finish from a tight angle, having been played in by Benzema.

Earlier on Sunday, former Spain international Roberto Soldado scored twice as Granada moved into sixth with a 2-0 win over Real Betis, while Getafe beat Cadiz 2-0 and Celta Vigo made it four straight victories by seeing off Alaves by the same scoreline.